In defence of identity

It's not easy to categorise Jordan Peterson. He calls himself a "classic British liberal" but he's not entirely like the "free market, individual liberty and limited government" right-liberals who have dominated the establishment centre-right parties.

For one thing, he is not a materialist in his philosophy and nor does he believe that self-interest or the pursuit of happiness are adequate ideals in life. He accepts the reality of differences between the sexes. He takes the idea of life as a moral project very seriously.

Even so, he has kept the strongly individualistic outlook that is typical of classical liberalism. He frequently criticises the idea that we might take pride in the achievements of the group we belong to; he believes that we may only have pride in individual accomplishments. As an example:

And he also approved of this graphic in which individualism is pitted against all forms of collectivism, including nationalism: 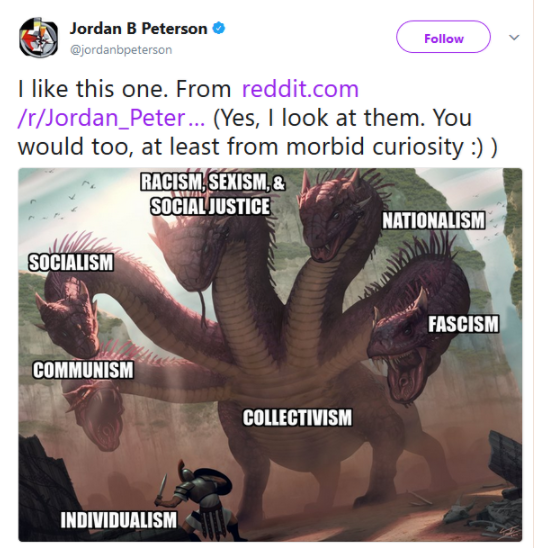 He even claims that the very "rightness" of the West is its commitment to individualism rather than to group identity:


Your group identity is not your cardinal feature. That’s the great discovery of the west. That’s why the west is right. And I mean that unconditionally. The west is the only place in the world that has ever figured out that the individual is sovereign. And that’s an impossible thing to figure out. It’s amazing that we managed it. And it’s the key to everything that we’ve ever done right.

In other words, we consummate our individual lives within natural forms of community. When we are forced to attempt a solo development, we truncate who we are as individuals.

The question really is this: why should I not simply identify with myself and my own accomplishments? Why should I identify as well with my own particular tradition, whether of family, ethny, nation, race or civilisation, and take pride in its achievements?

The answer to this is interwoven, but we can draw out some of the threads as follows.

First, a group identity connects the individual deeply to a particular people, culture and place. Instead of existing in life as a kind of tourist, watching from the outside, uninvested in any particular tradition, my identity grants me a sense of connectedness, so that I feel rooted to where I live and to the community I live in.

As a by-product of this, I will feel a sense of belonging, a condition that we as humans naturally seek, to be part of something meaningful, that has a significant common purpose attached to it, and that helps to enrich, and give a particular flavour to, the sense of who we are.

My identity will then strengthen my commitment to the community I am part of. I will be more likely to commit to building a family and to raising children to successful adulthood. I will be concerned to uphold a healthy culture of relationships and family life. I will want to pass on my heritage to my children, and will therefore retell the folk culture and give patronage to the fine arts. I will have a stronger motivation to conserve the places of natural beauty, and the significant landscapes, that I am not merely visiting, but am a custodian of.

A group identity encourages me to build on the best of my own tradition, preserving it for future generations. It connects me across time, to generations past, present and future. It helps to hold a community to a moral standard, so that one generation is not thought to fail their forebears, or to lower the regard in which a community holds itself.

A group identity is the only way to guarantee, in the longer term, cultural diversity. There is not only a significant benefit in feeling connected to your own culture, but also in experiencing other living, breathing national or ethnic cultures. If we may only have an individual identity, and therefore if we logically become interchangeable within a global network, then over time there will emerge a single global, commercial culture, in which one modern city will closely resemble another, no matter where it is.

Nor is it realistic to imagine that our achievements are ours alone. Everyone is influenced either positively or negatively by the culture they inhabit, and this culture is the product of the choices of countless people over time. We rely on others to grow our food, or to police crime, or to sweep the streets. Even our mental capacities are the product of choices made by countless generations before us. As positive as it may be to take personal responsibility for our life outcomes, we have to integrate this with the truth that we stand on the shoulders of others, and that what a community achieves together, or fails to achieve, will have an impact on individuals into the future.

The idea that we may only take pride in individual achievement undermines a community by rendering as less purposeful the necessary, but unheralded, work that most people perform as part of their daily routine. Not everyone can be a professor, or a composer, or an actor and stand out for their individual achievements. This isn't laziness - it is simply inevitable that most people's labours will not attract public attention. It makes more sense to think that there is "a community at work, striving to do each role well" and then for that community to celebrate together, and have pride in, those individuals who emerge publicly for their achievements in pursuits such as sport, or science or the arts.

(This arguments goes a step further. When there is a close sense of community, there is a pride in communal achievements, such as the beauty of the towns, or the prosperity of industries, or the elegance of the women or the toughness of the men. There is a pride in what the community has achieved together.)

Group identity has another advantage in that it creates bonds of loyalty and support within a community, which then provides for individual security. If you know that you live among people with a shared identity, then you are more likely to have a freedom of movement, secure property rights, freedom of speech and access to employment. To take a clear example, white South Africans are currently facing land expropriation, are subject to high rates of crime, are discriminated against in employment, and cannot move freely at night but must barricade their homes. They are less well off as individuals than, say, Japanese who enjoy security among their own group within their own homeland.

Finally, group identity helps to hold together distinct communities, which then become unique expressions of the human spirit, to the point that there is an inherent good to their existence, a good that draws out a particular kind of love (love of country) that helps to complete and to nourish the human soul. Aleksandr Solzhenitsyn said something along these lines in his famous Harvard University address:


The disappearance of nations would impoverish us no less than if all peoples were made alike, with one character, one face. Nations are the wealth of mankind, they are its generalized personalities: the smallest of them has its own particular colors, and embodies a particular facet of God's design.


A note to Melbourne readers. If you are sympathetic to the ideas of this website, please visit the site of the Melbourne Traditionalists. It's important that traditionalists don't remain isolated from each other; our group provides a great opportunity for traditionalists to meet up and connect. Details at the website.
Posted by Mark Richardson at 2:43 pm