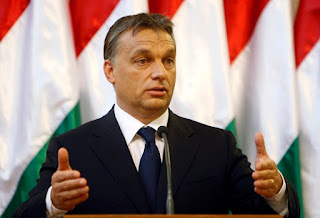 Viktor Orban, the Prime Minister of Hungary, is fast becoming one of the great European statesmen. He gave a speech in front of a massive crowd this week in which he clearly laid out the situation facing Hungary. Here are some highlights:


Together we have fought many great fights and memorable battles. But the greatest thing that we could realise in our lives, the greatest battle that we could fight together is still ahead of us. And every indication is that it is immediately ahead of us now. The situation, Dear Friends, is that there are those who want to take our country from us. Not with the stroke of a pen, as happened one hundred years ago at Trianon; now they want us to voluntarily hand our country over to others, over a period of a few decades. They want us to hand it over to foreigners coming from other continents, who do not speak our language, and who do not respect our culture, our laws or our way of life: people who want to replace what is ours with what is theirs. What they want is that henceforward it will increasingly not be we and our descendants who live here, but others. There is no exaggeration in what I have just said. Day by day we see the great European countries and nations losing their countries: little by little, from district to district and from city to city. The situation is that those who do not halt immigration at their borders are lost: slowly but surely they are consumed. External forces and international powers want to force all this upon us, with the help of their allies here in our country.

...Dear Friends, we not only want to win an election, but our future. Europe – and within it we Hungarians – has arrived at a turning point in world history. National and globalist forces have never squared up to each other so openly. We, the millions with national feelings, are on one side; the elite “citizens of the world” are on the other side. We who believe in nation states, the defence of borders, the family and the value of work are on one side. And opposing us are those who want open society, a world without borders or nations, new forms of family, devalued work and cheap workers – all ruled over by an army of shadowy and unaccountable bureaucrats. On one side, national and democratic forces; and on the other side, supranational and anti-democratic forces.

...Europe and Hungary stand at the epicentre of a civilisational struggle. We are confronted with a mass population movement which is an imminent danger to the order and way of life that we have known throughout our lives up until now. So at one and the same time we must defend our achievements so far, and enter battle to ensure that there will even be any point in continuing. Unless we protect our way of life, the meaning of everything we have achieved will be lost. If in the future the country is not Hungarian, what is the point of progress? Let’s not distract ourselves: we do not need to fight the anaemic little opposition parties, but an international network which is organised into an empire. We are up against media outlets maintained by foreign concerns and domestic oligarchs, professional hired activists, troublemaking protest organisers, and a chain of NGOs financed by an international speculator, summed up by and embodied in the name “George Soros”. This is the world we must fight with in order to defend that which is ours. The good soldier does not fight because he hates that which is facing him, but because he loves that which is behind him. He loves Hungary and Hungarians.

...we shall fight against what the empire of George Soros is doing to Hungary, and what it wants to do to Hungary. This is our homeland, this is our life, and we have no other. Therefore we shall fight for it to the end and we shall never surrender. We know that ultimately in every electoral district they will stand against our candidates. Their task is to win power and implement the grand plan: to break Hungary, which stands in the path of immigrants; and first to settle thousands, then tens upon tens of thousands of immigrants in Hungary within a few years. These numbers are no exaggeration. Europe is now under invasion. If we allow it to happen, in the next one or two decades tens upon tens of millions will set out for Europe from Africa and the Middle East. The western half of Europe looks at all this with its hands raised in surrender. Those who raise their hands have laid down their weapons, and will never again decide their own fate. The history of the defeated will later be written by others. The young of Western Europe will see this when they become minorities in their own countries, and they have lost the only place in the world that could be called home. Forces are appearing, the like of which the world has not seen for a long time. In Africa there will be ten times as many young people as in Europe. If Europe does nothing they will kick down the door on us. Brussels is not defending Europe and it is not halting immigration, but wants to support it and organise it. It wants to dilute the population of Europe and to replace it, to cast aside our culture, our way of life and everything which separates and distinguishes us Europeans from the other peoples of the world. It will be small consolation that the peoples of Europe will not forgive those leaders who completely changed Europe without first asking its people. Let us be proud of the fact that we are the only country in the European Union which has asked people whether or not they want mass immigration.

I know that this battle is difficult for everyone. I understand if some of us are also afraid. This is understandable, because we must fight against an opponent which is different from us. Their faces are not visible, but are hidden from view; they do not fight directly, but by stealth; they are not honourable, but unprincipled; they are not national, but international; they do not believe in work, but speculate with money; they have no homeland, but feel that the whole world is theirs. They are not generous, but vengeful, and always attack the heart – especially if it is red, white and green. But, Dear Friends, we have always known that there is much at stake. Hungarian history has accustomed us to fighting for that which is the natural prerogative of more fortunate peoples. For us a single tremor is enough, a lame duck government is enough, an election result which goes awry is enough, and everything is set adrift – everything that we have spent years of hard work on. This is a corner of the world which is exposed to the elements, and which history tends not to leave in peace – even though we feel that by now that is what we truly deserve. Our ancestors expressed it well: a cowardly people has no homeland. And we summoned up our courage when it was needed. It was never easy.

Perhaps you feel as if the whole world is yours, and as if you could take on all comers. And you are right: a lack of ambition is the definition of mediocrity. And life is good for nothing if you do not do something with it. But in your lives, too, there will come a moment when you realise that one needs a place, a language, a home where one is among one’s own, and where one can live one’s life in safety, surrounded by the goodwill of others. A place where one can return to, and where one can feel that there is a point to life, and that in the end it will not just slide into oblivion. By contrast, it adds to and becomes a part of the majestic thousand-year-old creation which we simply call our homeland: the Hungarian homeland. Young Hungarians, now the homeland needs you. The homeland needs you; come and fight with us, so that when you need it, your homeland will still be there for you.


The good news is that Orban is leading in the polls right now (54% support) with less than three weeks to the elections.

If you would like to read the whole speech it is here, or you could watch the video below.

Posted by Mark Richardson at 1:23 pm