The two main political alternatives today are both unhelpful. The left is pushing an "identity" politics in which white men are held to be privileged oppressors who have to be brought down. But the mainstream right response to this isn't much better. Here is a quote from an interview between Andrew Bolt and Brendan O'Neill, prominent Australian right liberals: 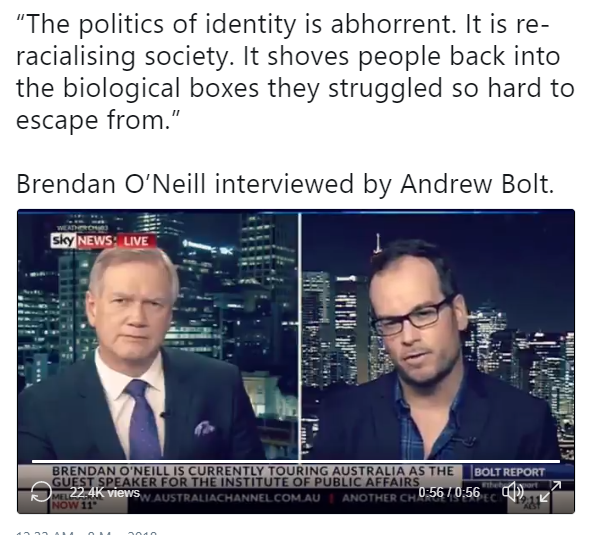 This is just liberalism 101. The idea is that the highest good in life is to be an autonomous, self-determining individual. Therefore, whatever is predetermined in life is a hindrance, a limitation, a box, a prison that the individual has to be liberated from. The biological things are predetermined, therefore we have to escape from our sex, our race, our ethny. All that matters is what we choose for ourselves, or (as per Jordan Peterson) what we achieve for ourselves.

And so Western man doesn't get to identify positively with manhood (as this is a "box" to be escaped from); nor does he get to identify with his own larger communal tradition. There is no coherent basis for defending this tradition, as for right liberals there are only self-creating individuals who have escaped the older identities.

It's important to remember this when you wonder why older generations of Western men did not do more to defend the existence of the West. If you assume that you live in a society that only exists as a collection of self-creating individuals with no distinct ties to each other, then what is there really at the larger level to defend? A person with this mindset will think that everything is OK, as long as the economy is healthy enough for individuals to pursue careers.

Andrew Bolt once wrote that he believed in,


The humanist idea that we are all individuals, free to make our own identities


Consider the implications of this. It means that identity doesn't really connect us to anything much. I begin and end with myself. It's the same problem that liberalism always faces. If I am free to make something however I like, then that something loses most of its meaning, as it could be anything at all depending on my own subjective whims. And that is what liberalism is saying about my identity: that it doesn't mean very much, because it could be anything, because it has to be freely chosen in any direction according to my own subjective preferences.

The traditional view of identity was different. A given identity was significant enough to orient me in my sense of self; to connect me to transcendent sources of meaning; to orient me, in part, to my telos (to the ends or purposes for which I was created); to connect me in a significant way to a particular people, place, culture, history and tradition; and to inspire a love for the good within my given identity and within my particular tradition and therefore to inspire a willingness to uphold and contribute to the particular culture, society and way of life that I belonged to. The traditional notion of identity engaged me in a way that the liberal one does not and cannot.

And that is one reason why Western man, if he continues to pursue a right liberal outlook, will fall alone.
Posted by Mark Richardson at 10:33 am