Why feminism is evil 2

Most people will be aware of the feminist insistence that we in the West live in a "rape culture". You might think that this would make feminists angry at men who rape or molest women. But that's not quite true. Sweden and Germany have recently experienced a wave of rape, molestation and sexual harassment of women in public swimming pools, at train stations, and at music concerts, sometimes by large groups of men, but feminists are not really up in arms about this. Why? Because the attackers are not white men, but immigrants from North Africa and the Middle-East. In fact, a Swedish feminist politician, Barbro Sörman, has tweeted that it is worse when Swedish men rape than when immigrant men do, because Swedish men do it as an "active choice". 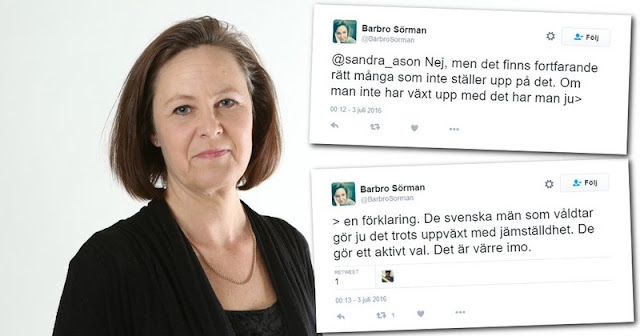 What feminism is directed at is not so much opposing men but more pointedly at the defeat of one's own men. White feminists are seeking the defeat of white men (if you believe I am overstating this you need to read the twitter feeds of some prominent feminists - they do not hide their intentions, they nearly always specify white men as the group they are trying to bring down).

One purpose of this is, I believe, to disrupt the normal processes of heterosexual bonding between men and women. A person who no longer sees goodness or worthiness in the opposite sex is far less likely to feel the deeper and more enduring kind of love for a member of the opposite sex and is therefore less likely to make a commitment to marriage or family.

The constant feminist denigration of men as hostile attackers of women is one way of disrupting this bonding between men and women. It severs the natural sense of a larger loyalty between the men and women of a society, the sense of men and women united together for the benefit of a family, community or nation.

There is another aspect of the way that heterosexuality works that feminism disrupts. Young men and women usually have a sense of the finer qualities of the opposite sex that draws out admiration and love. It is not that a young man suddenly finds the unique qualities of just one woman something to love - if that were the case he might just as easily fall in love with a man. Instead, he sees something fine within womanhood, and he looks for a woman who embodies these qualities. Sometimes, young men and women idealise the better qualities of the opposite sex as part of this process.

Traditionally men would perceive a kind of delicacy of beauty and goodness in women ("loveliness") that might be felt as something transcendent (hence much Western art and culture).

How can young women come to a sense of a transcendent ideal of manhood if they are brought up on the idea of men as a hostile, violent enemy to women? And if men have a sense of women as the ideological, political enemy, then the feminine ideal is likely to be lost as well. And with it part of the bonding process.

(I know that red pillers might point out that this allows men to recognise more clearly the flaws within female nature, which is no doubt true, but what a traditional society is focused on is strengthening the path to family formation and encouraging the loves and commitments associated with family life.)

We have to learn from what has gone wrong in the West, and one lesson is that feminism cannot be given free rein to disrupt the relations between the sexes. What kind of future is there, as this hardening into oppositional forces continues?
Posted by Mark Richardson at 11:38 am