This is the woman teaching French children about gender?

Last month I reported on a victory for traditionalists in France. Large demonstrations forced the government to backtrack on its programme of introducing "gender theory" into French society.

The Boston Globe has published an unsympathetic report on these demonstrations:


The spark that rekindled the movement was, of all things, a grade school program called the “ABC of equality.” This experimental project, launched by the government in late 2013 in a handful of grade schools, encouraged children to consider that though some biological differences between the sexes exist, other differences are “constructed” by society, a product as much of stereotypes as of physical differences. According to its critics, the lesson plan was inspired in part by the work of American gender theorists like Butler.

....Enough people had become horrified by the new impact of “gender studies” that, in February, they turned out in droves. Nearly overnight, “la théorie du genre” was on everyone’s lips. Gender theory was the “obsession” of the Socialist government, one conservative news magazine declared. Activists contacted public libraries to demand that they pull texts tainted by American gender theory from the shelves.

As a result of all this, Butler suddenly found herself massively famous in France.


The report plays down how radical gender theory is. Here is Judith Butler denying the reality of sex distinctions:


... gender is a performance ... Because there is neither an “essence” that gender expresses or externalizes nor an objective ideal to which gender aspires; because gender is not a fact, the various acts of gender create the idea of gender, and without those acts, there would be no gender at all. Gender is, thus, a construction ...


This is almost the exact opposite of the traditionalist view on sex distinctions (we would concede that understandings of sex distinctions are influenced by society; however, at the same time we would hold that there does exist a masculine and feminine essence and that there is an objective ideal which our masculinity and femininity aspires to.)

So who is this Judith Butler who has been put in charge of the sex identities of French children? Well, here is a recent photo: 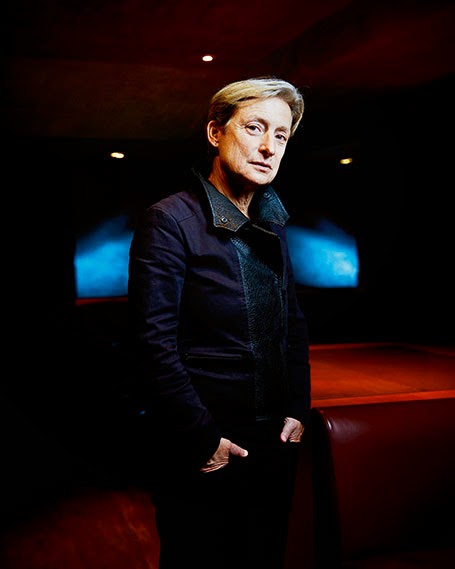 Yes, she is a lesbian, feminist academic. That is who the modern French state believes is the best person, the expert, to guide young French girls and boys along the path of development toward manhood and womanhood.

The problem with the photo is not how pretty or otherwise Judith Butler is. You don't have to be good-looking to be a good philosopher. I just think it reveals starkly how much at the cutting edge of unfeminine Judith Butler is. She is an outlier, who clearly has never experienced much of the feminine, who is nonetheless being pushed forward as the authority on gender for French girls.
Posted by Mark Richardson at 10:17 pm