Liberals want to make sex distinctions not matter. Logically that means that both men and women have an equal duty to serve in the army. And so it's not surprising that Norway has become the first European country to begin conscripting women into its army. The new policy was supported on both the left and the right.

The thinking behind the policy was put simply enough by one of the young women who is liable to be called up. Cana Elgvin said "I think it is natural that in an equal society girls and boys have the same duties."

That attitude casually assumes that men and women are made the same way for the same purposes. I think Cana herself is living proof that this assumption is wrong. Cana is the 17-year-old Norwegian girl on the right of the photo below. Was she really made for aggressive physical combat? For the physical rigours of combat? Look at how slender her forearms are. Could she really lug around a heavy weapon with those arms? Is she equipped with hard chest muscle and muscular limbs? And does she look like she has the emotional hardness and the aggressiveness to stand up for herself in a bayonet fight? And should she, as a woman, be expected to be hard in this way? Would that be the highest realisation of her feminine being? 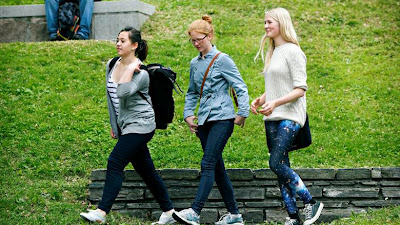 And what message would her conscription into the army send to Norwegian men? Men are inspired by the beautiful womanhood they perceive in women, a beauty which has a softness and vulnerability to it. The sense of duty men have to protect women from harm is in many ways a response to this perception of beautiful womanhood. But what if the message is that men and women are just the same, with the same duty to serve in the armed forces? Will Norwegian men then have the same sense of duty to protect women? Will they maintain the same masculine culture that breeds good soldiers?
Posted by Mark Richardson at 8:23 pm