Sweden: the nation as a multicultural workplace

Here's some synchronicity for you. Yesterday I wrote a post in which I criticised Australian writer David Penberthy for viewing the nation as a multicultural workplace.

Today I looked at the Swedish news and a Swedish minister was setting forth his own view of the nation as a multicultural workplace.

Tobias Billström is quoted as saying that 'Every global citizen should work in Sweden'. The Local website then gives his speech as follows:

Continued openness to the outside world is critical to our future development. Mobility, both migration and international trade, promotes our economic growth.

It must also be noted that Sweden is a small country on the edge of Europe with a climate that isn't altogether welcoming for part of the year. Sweden has therefore taken a leading role in international migration. When others lower the barriers, we open more roads. In the global competition for labor, Sweden should be able to attract the people who move across borders.


Sweden didn't seem to do too badly economically when the Swedes took responsibility for their own development rather than outsourcing it to others. But that traditional way of doing things doesn't fit the liberal concept of what a nation is - that it's a kind of multicultural workplace.

And so the Swedes have gone to an extreme of open borders - they are allowing employers to set their immigration policy. Here is Billström again:


Following reforms enacted in 2008, the prerequisites are in place for meeting the needs of the Swedish labour market by now allowing employers to decide what skills are needed at the company.

There's no public authority as well suited as the employers themselves for assessing those needs and therefore there are no restrictive quotas or no requirements for a specific skill or education level.


No quotas. No requirements for skills or education. What Sweden looks like in the future will be decided by employers, not by the Swedish parliament.

Liberals are making life a very small thing. What is thought to matter is labour force participation - above and beyond that doesn't seem to register much in the minds of liberal technocrats. And the only community we are thought to belong to is a global one of wandering labour resources.

Can this really last? Are people really going to be satisfied with such a trivialised material view of what life is about? And can a society really hold together when there is no sense of a loyalty to nation that transcends economics?

There are some Swedes who don't accept Billström's trivialising, dissolving concept of nation. I don't know much about the Sweden Democrats, so I can't endorse everything about them, but they have a more traditional concept of the nation and their support is growing: recent opinion polls put them as the third most popular party in Sweden.

A picture of the leader of the Sweden Democrats, Jimmie Åkesson: 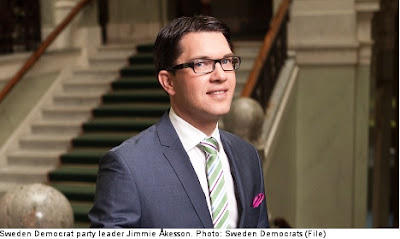 Posted by Mark Richardson at 10:41 am