Here is a banner from the 2009 Pride parade in Stockholm. It was part of a float organised by Swedish anarchist feminists. The banner reads "We hate white rich straight men". 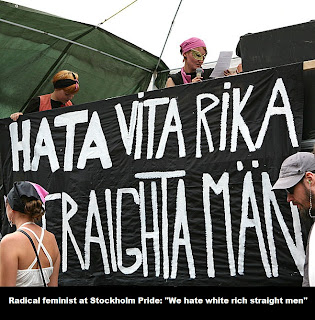 There's reason to take note of the slogan. It expresses openly a political idea that is widely held on the left. The idea is that the reason there is injustice in the world is that white, rich, straight men created society to be unjust in order to enjoy an unearned privilege over those that they "othered".

That has a number of negative consequences for ordinary whites. It means that any success that white people have is attributed to an unearned privilege rather than to hard work, or to family stability, or to stable community life. That's in contrast to the success that people of other races have, which is, in ordinary fashion, held to be a result of their efforts and talents.

It means too that it's difficult for whites to identify positively as whites. Most young white people are subjected at school and at university to a barrage of messages about white racism, and those who do attempt to identify positively as whites will often be assumed to be motivated by a desire to uphold "white supremacy". Again, whites are treated exceptionally in this regard - there is no similar pressure on, say, Australian Aborigines, to identify negatively as a people.

Finally, the theory that whites are to blame for social injustice means that few on the left are concerned about the future fate of historically white nations and peoples. First, the theory portrays whites as all powerful, so it's difficult for many on the left to recognise that whites might be vulnerable. Second, the aim of the theory is to bring whites down, so the focus is on how to disempower whites, rather than how to help them survive into the future.

Will the world enter into an era of social justice - of perfected freedom and equality - when there are no more rich, white, straight men around? That is what the leftist theory predicts - but given human nature it seems highly unlikely. Already it's the case in the U.S. that Asian Americans are on average wealthier, better educated and are over-represented in the professions compared to whites. As whites decline, it's likely that Asians in both the U.S. and Australia will come to dominate in these areas. So what, then, was the point of the decades long assault on the white majority?
Posted by Mark Richardson at 3:06 pm