Don't be that guy

Which guy? The one below: 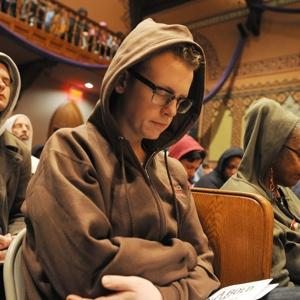 Who is he? His name is Brandon Giles. He's sitting in a church in New York wearing a hoodie.

Brandon is the dead-end white guy, the one who is spiritually defeated and disordered.

You may have followed the story at View from the Right, but I'll quickly retell it. Late last month in Florida, a neighbourhood watch captain called George Zimmerman noticed a young African-American man he didn't recognise, Trayvon Martin, in his gated community. He thought Martin was acting suspiciously and called the police. By the time the police arrived an altercation had taken place and Zimmerman had fatally shot Martin.

Zimmerman's story is that Martin challenged him, knocked him down and was beating him and that he acted in self-defence. There is some support for this version of events; when police arrived Zimmerman had a broken nose and was bleeding from the back of his head. One witness corroborated Zimmerman's story.

The police did not charge Zimmerman, finding the evidence of self-defence to be credible.

But then the story took on a life of its own, being put into a kind of liberal script in which a black man was held to be the victim of white racism. Newspapers printed very youthful looking pictures of Trayvon Martin and President Obama said that "If I had a son, he would look like Trayvon" and that all of America had some "soul searching" to do over the incident. This then led to people, like Brandon Giles, dressing in hoodies in solidarity with Martin.

The media presentation of the issue has unravelled to a considerable degree. Zimmerman, it turns out, is of mixed ancestry and looks Hispanic. Martin was into gangsta culture, wore a grill, had recently been suspended from school for 10 days, and was a lot more physically mature than early newspaper reports suggested.

So how should a well-intentioned white guy react? It is perfectly legitimate to want a thorough investigation and to want justice to be served. But what's pathetic is for a white guy to jump straight into the script of "evil white racists oppressing black men." Not only is it an illogical way to filter reality, worse still it is a symptom of an underlying spiritual defeat or disorder.

So let's not be that guy anymore. We can do much better.
Posted by Mark Richardson at 8:56 pm