The folly of whiteness studies and those Duluth billboards

The town of Duluth in Minnesota has hit the headlines. The white mayor of that town, Don Ness, has backed a billboard campaign attacking white people for enjoying a racist, unearned privilege. 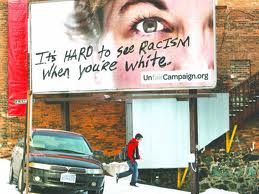 What's that all about? It goes back to an academic movement called whiteness studies.

There is a split between liberals when it comes to race and ethnicity. Liberals generally agree that race should be made not to matter in society. For right liberals that means adopting the idea of being colour blind, including to one's own race. But left liberals take things further. They explain racial disparities the same way they explain disparities between men and women. They believe that a dominant group created a false category (whiteness) in order to impose a system on society which granted them an unearned privilege at the expense of the "other".

That makes whiteness exceptional in a negative sense. It connects whiteness, as a matter of definition, to supremacism and racism. That's why students at the University of Delaware were taught, in compulsory diversity training sessions, that:

[a] racist is one who is both privileged and socialized on the basis of race by a white supremacist (racist) system. The term applies to all white people (i.e., people of European descent) living in the United States, regardless of class, gender, religion, culture or sexuality.

Whiteness studies is an academic spin-off of this left-liberal approach to race. The academics teaching these courses are concerned that whites have bought into the "I am colourblind" mentality, so they want to force whites to confront their whiteness and their privilege.

And what exactly is white privilege supposed to consist of? Two things are emphasised. First, whites are supposed to have better educational and employment outcomes not because they have worked hard or created stable forms of community and family life, but because they benefit from hidden privileges which advantage them.

Second, whites are thought to be privileged because, as the majority group, they get to set community norms, i.e. to define what is normal.

But neither of these supposed instances of privilege really stands logical scrutiny. First, when it comes to education and employment, whites are not the most privileged group in America - Asians are. In 2010 the median income for Asian-Americans was a considerable 18% higher than that for white Americans. In terms of professional outcomes, Asian-Americans are doing remarkably well:

They are doing well, in part, because of a high level of family stability and a strong commitment to education and career. But their success undermines the claims of the whiteness theorists. After all, Asian-Americans aren't white and nor are they a majority. And yet not only have they done well, they have done better than whites when it comes to employment and income. How could they have done this if the whole system was based on securing white privilege?

Second, whites are supposedly privileged because as the majority they get to set the cultural norms that they feel comfortable with but which don't suit those from other races. But if that is true, then it undermines the original liberal claim that categories of race have no real content and can be made not to matter. What liberals are admitting to, in adopting this argument, is that if you put one large group of people from one race together they will create a culture that will feel alien to those of another race.

And, furthermore, if the argument is true, then the logical response is the exact opposite of what is being demanded by the left-liberals in Duluth. If it is a privilege to live within your own cultural norms, and a hardship to be deprived of this, then it makes sense to preserve the cultural norms of the 90% majority. Why attack something that is an important good to such a large number of people within a community?

Has there been opposition to the billboards? Yes, but from what I've seen mostly as a defence of the right-liberal position, that the billboards are racially divisive, we're all just humans, can't we forget about race etc. The problem with that position is that it doesn't allow white Americans to assert a collective defence. And the attacks are likely to keep coming. In Duluth, for instance, there are left-wing churches offering courses titled "Cracking the shell of whiteness". Similarly, the billboard campaign is supported not only by the mayor's office, but also by the local YWCA (an astonishingly left-wing outfit), and by the local campuses of the University of Minnesota and the University of Wisconsin Superior.

Where is the pushback going to come from? It won't happen if white Americans don't identify with a communal tradition of their own. If white Americans take a right-liberal position, they will be left as individuals to complain about the situation, whilst being hamstrung in offering any real resistance.

Finally, the discussion at VFR of this issue is worth reading.
Posted by Mark Richardson at 11:33 pm