Did South Africa's President sing a kill the Boer song?

This has not been in the news at all in Australia. It appears that the South African President, Jacob Zuma, sang a song earlier this year which contains the phrase "kill the Boer" - the term "Boer" referring either to farmers or to white men.

A group representing the Boer population has lodged a formal complaint with the South African Human Rights Commission against the President for singing the song.

It's a particularly serious issue in South Africa, as 3000 white farmers have been murdered in that country since the mid-90s. A written declaration was presented to the EU this month protesting the murders (see below): 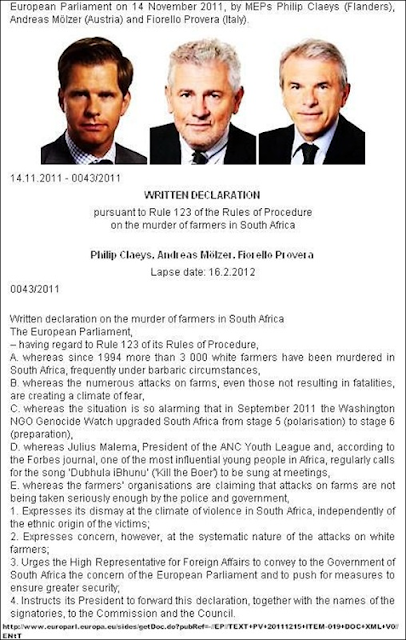 There are websites (here, here and here) which track these murders (warning, the content can be graphic).

And here is video of Jacob Zuma, the President of South Africa, singing the song with gusto at the ANC centenary celebrations in Bloemfontein in January:

I can't vouch for the translation, but the lyrics of the song have been rendered as follows:


It has been suggested that Zuma sang a slightly different version of the song with the lyrics "Kill the pink skin" rather than "Kill the Boer" but the overall effect would seem to be much the same.

Why isn't there more international attention focused on the fate of the Boers? One reason is that the Western middle-class is ideologically committed to the idea that whites are privileged oppressors and therefore are immune from persecution. They cannot bring themselves to recognise the vulnerable position of whites in South Africa, particularly the white farmers living in isolation on farms. Nor, perhaps, are they aware of the real poverty of some of the Boers in South Africa, who are given the lowest priority when it comes to employment.

Reuters ran an article on Afrikaner poverty in South Africa back in 2010. About 10% of the white population is thought to live in poverty, with about 100,000 struggling to survive. There are now white squatter camps close to the South African capital Pretoria.

Posted by Mark Richardson at 4:05 pm