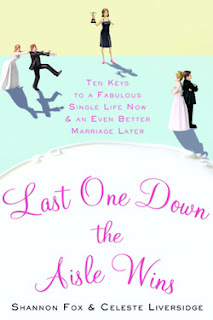 Two American women have written a book which tells women not to marry before the age of 30. They're careful not to pitch themselves to women as anti-marriage; instead, they claim that by staying single in their 20s, women will better prepare themselves for a successful marriage later on.
So what are women supposed to do while they (and their future husbands) wait (and wait and wait)? They're supposed to live the independent single girl lifestyle and:

focus on education and career and build financial stability; develop and improve your emotional health, body image, and confidence; take risks and tap into your adventurous side; create a dependable network of friends and mentor relationships; clarify and embrace your spiritual self; resolve unhealthy family dynamics and establish yourself as an independent woman.

It's an attempt to make explicit an underlying trend in liberal societies. Liberal societies emphasise the idea that women should be autonomous. One way of achieving this is to defer family commitments for as long as possible and to string out an independent career girl lifestyle.
But this has some very negative consequences. Women who have no intention of marrying in their 20s change the way they select for sexual partners and end up rewarding players or thugs, which then disrupts a family guy culture amongst men. Women who leave things to their 30s often then find it more difficult to partner as they are past their prime of youthful beauty and fertility. Women in their 30s have to race their biological clocks and often lose reproductive choice. And, most of all, living a single girl lifestyle for so long is not a good preparation for the realities of motherhood and marriage.
I won't argue the case in detail in this post, because another blogger, Dalrock, has already done a terrific job in arguing against the book in question. I highly recommend that you read his two posts:
Last one down the aisle wins part 1
Last one down the aisle wins part 2
Posted by Mark Richardson at 9:45 am