Anna Ardin is the 31-year-old Swedish woman who has accused Julian Assange of rape. I took a look at her website to get some idea of her politics. It turns out that she is a feminist, Methodist vegan. She believes in patriarchy theory, describes herself as a liberal, supports legal abortion but opposes abortion personally (believing that life is sacred) and is yet another left-wing European woman who identifies with the Palestinians.

In fact, what struck me most of all was the contrast between two photos of Anna Ardin. The first is of her relaxing with a friend in Sweden (she's on the left): 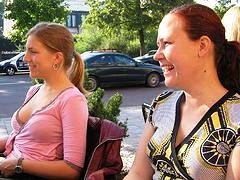 The second is a photo of her on a visit to Gaza: 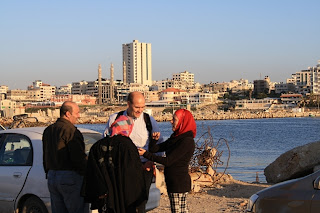 In the first photo she has her body prominently on display, in the other she's gone the other way and put on the veil. She has defended wearing the veil as follows:

For some, the veil is a way to protest against an exclusive society, for others it is a Muslim identity marker or simply a personal way to get closer to God.

Where is she now? According to her website she's living in a Palestinian village in Israel and studying Arabic. It makes me wonder if she'll eventually follow the lead of Lauren Booth and convert.
Posted by Mark Richardson at 5:01 pm