Penelope Trunk: women should be paid more than men 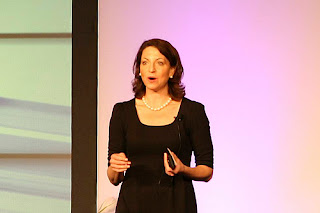 I'm not quite sure what to make of Penelope Trunk. She's a feminist of sorts, who takes a set of modern girl attitudes and runs with them to places most would pull back from.

Take, for instance, her reaction to the Karen Owen story. Karen Owen was a Duke University student who bedded 13 sportsmen and wrote a detailed report on her experiences, the report then being leaked to the internet.

According to Penelope Trunk, Karen Owen is an empowered modern girl:

Owen's slides capture the shift in women's empowerment, which is happening at the workplace and having the ripple effect of empowering women in sex. Owen's slides make me excited about the new generation of women and how much they take their own power for granted. I'm excited to see what they will do with it.

How is sleeping around empowering? Penelope Trunk sees young women using sex appeal to get what they want in the workplace, in particular by outcompeting young men. This is the sense in which she connects sex to female empowerment:

So middle-aged men are often alone, day after day, with single, hot young women. When has this happened in history? At this point, there is a culture of men being smitten with young women, and young women feeling empowered enough to leverage that without actually giving in.

And, when it comes to young men, they are not earning as much as the women (the Wall Street Journal reports that in Atlanta young women earn an incredible 21% more than their male counterparts). Men are not as in high demand compared to women and since young women are sexy, and young men do not have power that can make them sexy, that's not likely to change. So twentysomething women are running circles around men of all ages. These slides do a good deal to confirm that.

What about the wages gap? Penelope Trunk doesn't think that women are discriminated against when it comes to wages. So is she satisfied with the situation? No, because she believes that women ought to be (and in some cases already are) paid more than men.

Women need to be compensated at a higher rate than men if they are to give up their personal lives in order to work. Law firms accomplish this by keeping women on partner track even when they’re part-time. Corporations do this by offering flex time and other business-bending options for high-performing women who want to take care of kids.

VCs talk endlessly about why there are so few women running venture backed companies, but it’s incredulous talk. The reason is that VCs don’t pay women more.

What else does Penelope Trunk want to see changed? She believes that women are discriminated against by not being allowed to have as much fun as men. By fun, she means getting drunk and having casual sex:

As soon as men and women start aging, the men are happier. Maybe they have had more training on how to have fun...

You can see the gap at the bar. Alcohol makes us have a more broad imagination and do a wider range of things. So why is it more acceptable for professional men than professional women to go out with friends and get drunk? Why is it okay for men to get drunk in order to have an easier time hooking up, but it’s not okay for women? This is such a serious problem that New York magazine calls the gap the the last frontier of feminism.

There's one last piece of advice Penelope Trunk has for women. She believes that women start to lose their competitive edge over men when they have children. So, no matter how much women love children, her advice is not to have any:

Having kids complicates a woman's life in ways that are not so difficult for men ... children affect women so much that they don't start earning less than men until they have kids...

I'm sure a bunch of women will write to tell me that their kids are the love of their life. But don't bother. Because I'm not saying women don't love their kids, and maybe I am saying that the lack of happiness is precisely because women love their kids so much ...

So Penelope's world view ends up dismally with a call for women to remain childless.

How does she get it so wrong? It's her assumption that what matters is individual career advancement and money. That's why she takes such a triumphalist view of young women using their sex appeal at work to get ahead of their male peers. She's not aware of how mercenary this sounds, how loveless. Nor does she seem aware that by trouncing their male peers women are reducing their chances of finding future happiness in marriage. The young men are seen as workplace competitors rather than as future husbands.

Similarly, the commitment of women to children has significance for her mostly in business terms. She thinks that it justifies women being compensated more for their hours at work, but she also worries that it reduces a woman's competitive edge later in life and that women should therefore not have children, no matter how much they love them and no matter how important it is for perpetuating families and communities.
Posted by Mark Richardson at 11:14 pm