Back in 2003, Peter Hitchens wrote a column on the prospect of Britons converting to Islam. He thought that women were more likely to convert, in response to the social chaos brought about by family breakdown, sexual permissiveness and drunkenness. Christianity, he wrote, wasn't well placed to offer an alternative to women, with the mainstream churches being empty and in decline. Furthermore, the trendy middle-class types associated Christianity negatively with an imperial past:

Might Islam become respectable among the politically correct middle classes, in a way that Christianity never really can, because Christianity is always associated in this country with the conservative, imperial past?

I remembered this column because it describes so well the recent conversion of Tony Blair's sister-in-law to Islam. 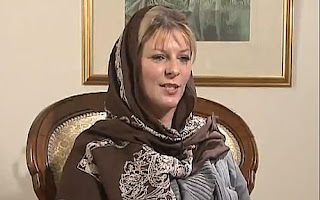 Lauren Booth was one of those politically correct middle class types. She began her journalism career as a sex columnist for a lads magazine, then started writing for the left-wing New Statesman paper. She became an activist for the feminist V-Day movement and for the Palestinians. She married and had two daughters, moved to the French countryside where her husband stayed home whilst she commuted to work. She drank much wine.

I was smashing the glass ceiling, Craig was breaking the mould. We (nervously) patted ourselves on the back.

She rejected Christianity along the lines predicted by Peter Hitchens. She went to one church but had conniptions when she found out it was Catholic:

That's it, then. I won't be going back this Sunday. Catholicism is religion's answer to McDonald's. Their main motivation is to create a world full of their customers and rake in the cash at the same time. And both have committed atrocities and leave you with a sense of guilt.

The Baptist church was beautiful but empty save for a few old ladies:

Last Sunday, we tried the grand, red-bricked, Baptist church. The interior was breathtaking. Wood on wood with more wood, interspersed with impressive, brightly coloured stained glass. We sat in the cosily rounded pews and waited for the show to begin. Two very aged white matrons and a big black lady in a bright pink hat with what looked like her granddaughter were our only companions. At two minutes to eleven, it was clear that there would be no last-minute rush for the sermon. I began to dread the thought of singing the first hymn, a jazzy-sounding number called "Higher, Higher, Higher". A miffed-looking school-marm in round glasses and a black trouser-suit stalked sulkily on to the small "stage" - it turned out she was the "pastor". She looked at row upon row of empty seats and sighed.

Her marriage began to break down. After one argument her drunk husband tore off on his motorbike, crashed and badly injured himself. They divorced. She threw herself into campaigns for the Palestinians and got a job for an Iranian based news agency.

And now she has converted to Islam, writing of the "comfort and strength" it gives to her. She has given up wine, reads the Koran, wears a headscarf and hasn't ruled out wearing a burqa.

She got burned by a modern girl Western lifestyle and so jumped to a more traditional non-Western alternative - just as Peter Hitchens predicted Western women might do. (In one recent column, for instance, she criticises the violence, drunkenness and crime of ladette culture in Britain and calls for a return of a more traditional femininity.)

Of course, for a Western traditionalist like myself this is a frustrating story. It doesn't surprise me that the modern girl life she planned for herself didn't work out well. But instead of returning to her own tradition, she has changed her allegiances entirely.

She has swung suddenly from feminist V-Day campaigns and boasting about breaking the mould of the traditional family to wearing a headscarf and considering wearing a burqa. She has jumped from rejecting Catholicism for its supposed "atrocities" to accepting Islam despite its association with terrorist attacks.

Hitchens got her right; I hope there aren't too many others.
Posted by Mark Richardson at 6:32 pm