Australian of the Year

Who should be Australian of the Year? Here are some worthy nominations:

Dick Smith     A leading figure from the business world who has come out against open borders. He has called Government plans to increase the population by 13 million via immigration "ridiculous" and says the policy is opposed by 9 out of 10 Australians. He is working on a documentary on the issue. He loses points, though, for limiting his opposition to population increase to environmental grounds and for suggesting that women be limited to two children (the already low birth rate is one of the excuses used by the Government for large scale immigration).

But I declare the winner to be ... 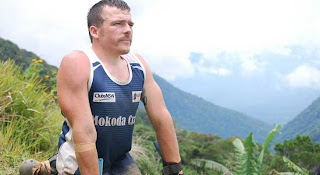 Kurt Fearnley   It's hard not to admire this man's efforts. He does not have the use of his legs, but nonetheless completed the gruelling 90km Kokoda Trail dragging himself along on his hands. He did it to raise funds for two men's health groups.

Were there any obvious contenders I missed? Feel free to make your own nominations in the comments section. (They don't have to be from the field of politics.)
Posted by Mark Richardson at 10:02 am