Here in Melbourne about 40% of students attend private schools. The private schools have good academic results but they are usually liberal in philosophy. As an example, consider an advertisement for St Michael's Grammar that ran last week in The Age. The advertisement consisted, in part, of quotes from the Head of School, Simon Gipson:

St Michael's is therefore a school committed to coeducation and to striving to assure a diverse community that reflects the rich, urban multiculturalism that is contemporary Melbourne.

"Gender is only one of a range of differences between people," he says. "Naturally, there are physiological distinctions and differences but as we know only too well, gender is a social construction that changes over time across cultures.

"What we should be focusing on are individual young people ... rather than homogenising them on the basis of gender ...

According to Simon Gipson, Head of St Michael's Grammar, there are physiological distinctions between men and women, but otherwise gender is just an insignificant social construct.

This is an orthodox liberalism in which not only is the individual will sovereign, but it is unbounded by created reality. Therefore, individuals aren't thought to be significantly shaped by something they are born to, such as the fact of being a man or a woman.

There are several grounds on which I could criticise Simon Gipfel's liberalism. On the St Michael's website it states:

St Michael's Grammar School is an Anglican co-educational school established by the Community of Sisters of the Church in 1895.

Is it really part of an orthodox Anglicanism to believe that gender is a social construct? Don't Christians believe that it was God who made us male and female as a central act of creation?

Out of curiousity I typed Christian and gender into google. One of the top search results was from a Christian site which, after stressing the equality of men and women, went on to state that,

So Simon Gipfel's view on gender runs counter to the Christianity his school was founded on. It is also anti-scientific. Scientists have discovered significant differences in the way that the male and female brain is structured. So gender differences aren't just limited to body shape and reproductive organs; the male and female mind is hardwired differently.

But it is the third criticism to be made that I'd like to focus on. Simon Gipfel has worked in education. Teachers more than anyone else know that there are significant gender differences. We work daily with teenagers and have the chance to observe the different ways that boys and girls act and interact.

So I have to suspect that Simon Gipfel is somehow compartmentalising his thoughts. He might well have a sincere, consciously held belief in the liberal idea that gender is merely a social construct. I expect, though, that below this level of formal belief, there is a part of his mind which does recognise that women are different in significant ways.

Could Simon Gipfel really have loved women without having a sense of what was distinctly feminine in their natures? Does he really not have a sense of a feminine ideal by which he judges some of the women he meets more positively than others? Could he really not have observed some of the typical ways that girls interact? The group hugs to console each other? The complex forms of verbal bullying? The particular sensitivities of teenage girls?

To show how possible it is for liberals to operate with a dual mind just look at the photograph accompanying the St Michael's advert: 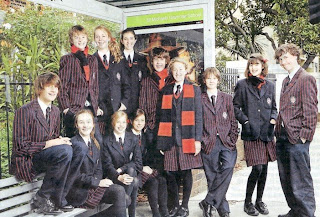 Interesting, isn't it? The school seems to have pitched itself to the parents on two different levels. In the text of the advert, the school set out its formal liberal beliefs. Presumably it was felt that parents would respond well to the liberal talk of the school being richly diverse and multicultural, as reflecting the larger community, as promoting individual differences rather than homogeneity and so on.

The photograph, though, conveys a very different message - one appealing to the less formalised values and beliefs of the parents. In the photograph the emphasis is not on diversity or individual difference. The students are very neatly uniformed, good-looking, middle-class, young Anglo-Australians, with the girls looking happily feminine. It's as if the school is attempting to reassure the parents that their children will be raised to carry on a very particular and distinctive Anglo upper middle-class tradition and way of life.

I think it's a worthy aim. But why pretend that you are representing a whole community? There are no non-Europeans in the picture. No tomboys. No working-class kids. No overweight children. And why pretend that you're emphasising difference and rejecting homogeneity when the students have been groomed and uniformed to within an inch of their lives?

Perhaps one of the reasons I'm not a liberal is that I wouldn't feel comfortable asserting a formal set of principles, whilst operating in the world with another "hidden" set of values and beliefs.

If I wanted my daughter to grow up according to a feminine ideal, then I would say so openly. If I wanted a school to instil a traditional, upper middle-class culture then I wouldn't pretend that it was reflecting the entire community.

A liberal culture operates as a kind of a game with unwritten rules. You are supposed to believe one thing as a superior moral position, whilst really doing something else. What does this cost the liberal personality? Even if you do well in the game, doesn't it cost a certain amount of self-respect (for not being honest with yourself)?
Posted by Mark Richardson at 5:15 pm