Just who attacked the Indian student?

Early this month an Indian overseas student, Sourabh Sharma, was bashed and robbed on a Melbourne train.

Who was to blame? The Islamic Council of Victoria angrily denounced white racism against brown people as having motivated the attack. It was, fumed Nazeem Hussain, a director of the ICV, a continuing legacy of Australia's dark past:

Sourabh Sharma, an Indian international student, was travelling home on the train after a shift at KFC when he was brutally bashed and robbed by six people.

As the 21-year-old lay on the floor, being kicked in the head, face and ribs, his attackers screamed racial insults. They left him bleeding, broken-boned and crying on the floor of the train while other passengers watched and did nothing to intervene ...

I am another brown person. I can say unequivocally, on behalf of every other non-white person in the country, that hearing about racially motivated crimes frightens us.

To an aggressor bent on beating up a "fob" (fresh off the boat) or a "curry", it does not matter that I was born here, and that my parents came here long before the attacker was born ...

Last week, the Islamic Council of Victoria issued a media release noting that police had "failed to adequately address the cause of the attacks — which is racism".

In response, Superintendent Graham Kent lashed out at the council on 3AW, claiming the police were "disappointed" and that the statement was "uninformed".

... The police are charged with upholding the law and fighting crime, whatever its causes. There is little benefit in denying the existence of racist attitudes in our communities.

Sure, the question of racism is something that, as a society, we often feel uncomfortable confronting, given our dark past ...

Where have we seen police addressing the racist aggressors? ... there has been no real, tangible response to this pattern of violent racism. The police are not responsible for defeating the disease of racism by themselves — the problem falls on all of our shoulders, particularly those of our leaders.

But what we can demand from police is a loud, vehement condemnation of racial intolerance. Victoria Police should not hesitate to do this ...

... the Government, police and Connex need to begin a campaign to fight racial intolerance.

But was Sourabh Sharma a victim of white racism? The police didn't think so:

Det-Sen Constable Buttigieg said the thugs did abuse him [Sourabh] while they kicked him to the head and ribs although their primary motivation was robbery.

"I think there was a mention where there was a comment similar to `why don't you go home?' but there was nothing more," he said.

"I think the motivation would have been robbery."

Better evidence, though, comes from the CCTV footage. There are four attackers visible in the footage. Two have their faces uncovered. Here is a still image of one of the young men (in a green T-shirt) who attacked Sourabh Sharma: 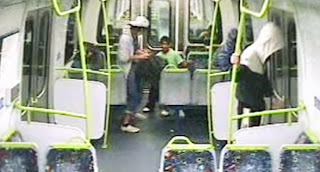 He's certainly not white. In fact, he looks as if he could be South Asian. Here's an image of the second attacker: 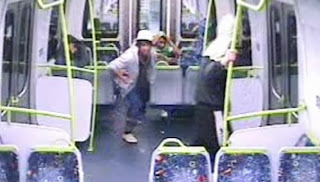 He's certainly not Anglo and probably not European either. There is, in fact, no-one in the CCTV footage who can readily be identified as a white person:

So what is going on here? Why would white Australians and white society be condemned for something they appear to have had no part in?

I suspect the answer has to do with politics. There's a fashionable idea on the left that whites invented the concept of race in order to gain an unearned privilege by oppressing others. Therefore, whites are held to be uniquely guilty of preventing the emergence of human equality.

If you believe this theory then you will look for instances in which whites are the violent aggressors and non-whites are the oppressed victims. It is these cases which will seem to prove your point.

It's convenient for the Islamic Society to follow along. It means that they are assumed to be the aggrieved victims of discrimination seeking redress. It means too that the established society loses a sense of its own legitimacy and its own interests.

It's not difficult to challenge the filtered view of reality. The image of the white racist oppressor breaks down not only when the perpetrators can be shown to be non-white, as in the attack on Sourabh Sharma, but more so when the victims of such aggressive violent crimes are white.

Just today it was reported that a young Anglo-Australian man was stabbed to death in Melbourne by several Asian men. He had stepped in to defend someone they were trying to attack. Later on, the Asian men caught up with him at a convenience store and murdered him.

This is part of a pattern of recent street violence in Melbourne. The victims have been overwhelmingly young Anglo men, who have been either stabbed or bashed to death by gangs of men of some other ethnicity.

And if the pattern of street violence doesn't fit the theory? Do we then close our eyes to a part of reality to make the theory work or do we reject the theory as false, as being unreasonably biased against one group alone?
Posted by Mark Richardson at 1:53 pm