Pope Francis on love of homeland

Pope Francis is not exactly known for being a conservative in the Catholic Church, but nonetheless he recently made a good defence of patriotism. Speaking on the topic of the morality of defending one's own country, he stated:

To defend oneself is not only licit, it’s also an expression of love toward one’s homeland; whoever doesn’t defend something, doesn’t love it. Instead, those who defend, love. 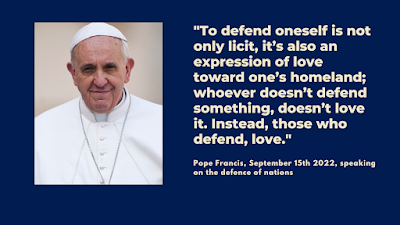 I particularly like the way he framed this, as it captures something important about patriotism. When you belong to a genuine national tradition, you see the good in it, and this naturally draws our love - it becomes a love of a significant good, perhaps even a type of transcendent good (a good that draws us to a higher aspect of reality and of ourselves). It then becomes natural to want to defend this good, which is why people will make sacrifices to uphold their national tradition, including making commitments to family life, to raising the next generation, to wanting to maintain the moral standing of the nation they are a part of, to creating a worthy national culture and so on.

The Catholic Church has something of a mixed record on the issue of defence of homeland, and no doubt it was easier for Pope Francis to make his comments, given that he was supporting the right of Ukraine to obtain weapons, and Ukraine is currently considered a progressive cause.

Still, there are many voices within the Catholic Church arguing for patriotism, so Catholics should not be pressured into thinking that they must support globalism. Cardinal Robert Sarah is one such voice: 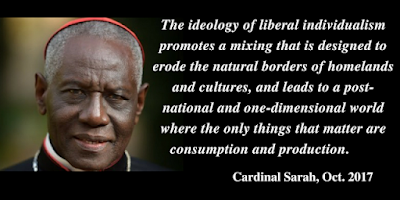 Cardinal Sarah is aware that globalism favours a technocratic vision in which people become "fungible", i.e. become mutually interchangeable units of production or consumption to the detriment of their personhood.

Similarly, Cardinal Burke has given an extensive speech on the issue, drawing on the work of St Thomas Aquinas. Cardinal Burke concludes by rejecting a globalist agenda:

It is clear that we and our homelands have responsibilities within the international community, but those responsibilities can only be fulfilled through a sound life in the family and in the homeland. Patriotism, in fact, fosters the virtue of charity which clearly embraces citizens of other nations, recognising and respecting their distinct cultural and historical identity.

...The divine authority, in accord with the order written upon the human heart, does not make just and legitimate a single global government...On the contrary, God meets us and orders our lives for the good in the family and in the homeland.

Posted by Mark Richardson at 10:22 am