Emma Watson, the actress best known for her childhood role in the Harry Potter films, is a feminist. She recently had this to say: 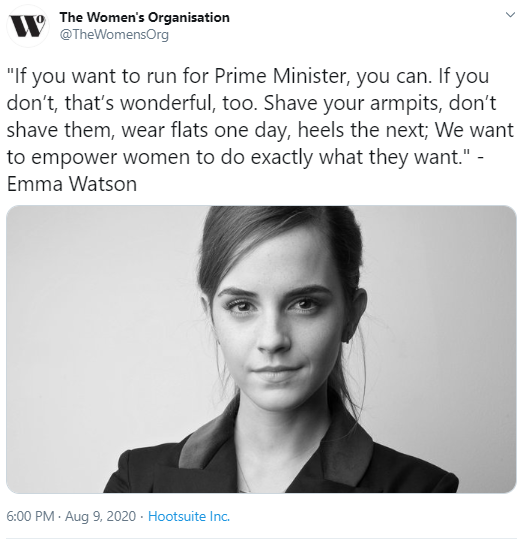 This might sound benign, but the moral formula she puts forward here has significant consequences. She is claiming that women are empowered when they can do whatever they want, no matter what it is that they want.

Of course, if this were just a case of wanting to wear different types of shoes, it would be harmless. But as a general principle of society, the liberal formula goes well beyond that. After all, if women are empowered when they can do exactly what they want, then the woman who wants to be a good mother by making personal sacrifices for her child is on exactly the same plane as the woman who sells herself on Only Fans to fund a drug habit. As James Kalb so often writes, all desires are equally desires. According to the formula, both women are empowered as long as they can follow their desires.

If you think my example is a bit extreme, consider the case of singer Cardi B who I wrote about last year. She and her fans responded to criticisms of her twerking videos by using the Emma Watson defence, namely that it is empowering for women to do whatever they want. Cardi B has just this month taken the principle even further by releasing a video that would have made prostitutes of yore blush. It is being marketed widely (with the lyrics, but not the video, partly censored) to girls, presumably in part because it fits in well with the ruling ideal of female empowerment.

The liberals who pushed the idea that we should do whatever we want as long as it did not interfere with the rights of others to do the same did not envisage Cardi B as the end product of their moral formula. They assumed that people would choose to act according to the middle-class standards for men and women of their era, i.e. as gentlemen and ladies. They thought that education would refine people, and reveal their inner high character.

It was not a realistic assessment of human nature. Nor did they account for the logic of their formula, i.e. for its failure to discriminate between the moral choices that we make. The message this formula sends is that there are no moral goods as part of the nature of things but only the satisfaction of individual wants. This alone would be enough to gradually erode a gentlemanly code of ethics, but in the longer run the subversion becomes more active. After all, if I am empowered when I can act to satisfy my desires, then it is moral for me to transgress and to break through restraints placed on my behaviour. The further I go in shocking sensibilities, the more liberated and empowered I am. Cardi B becomes the role model.

There was a time when acting exactly as you want would not have been thought empowering, but as lacking self-restraint. There was a range of moral terms to express this failure of self-discipline: dissolute, licentious, decadent, debauched, abandoned, incontinent, promiscuous, profligate, dissipated. The terminology suggests the moral concept: that in acting in an unrestrained way to gratify desires, we are no longer fully ourselves, but are lost in some way to our vices. Lost, not empowered.

Posted by Mark Richardson at 4:28 pm