I've just finished reading a book by Alan Jacobs titled The Year of Our Lord 1943: Christian Humanism in an Age of Crisis.

By 1943 it was becoming clear that the Allies were going to win the war. There was much interest in how the post-war world would be shaped. The book focuses on the work of five intellectuals of the period: T.S. Eliot, C.S. Lewis, W.H. Auden, Jacques Maritain and Simone Weil.

What is interesting is that these intellectuals were fearful that the West had lost its way and that without a change of course was likely to fail in the post-War world.

What did they identify as the problem? There are two main themes discussed in the book. The first concerns education. There was, for instance, a concern that education should promote moral and character formation, particularly for an elite who would be most influential in creating the culture of a society. As part of this aim, there was an idea that it was important to train or to educate a person in feeling or emotional response, not just in formal precepts.

This make sense to me. If someone doesn't feel or respond in a fully natured way to things, then it becomes difficult to enculturate them and to build human character.

The second theme is that of technocracy. Most of the writers seemed very aware that they were living in a time of transition, in which an older culture was giving way to a depersonalising, mass, technocratic one.

It's interesting, in this respect, that the year 1943 was chosen, as this was the year that the Australian Government made the formal decision to end Anglo-Australia and to have a more diverse population. The decision was made largely on technocratic grounds by planners and economists in obscure departmental committees, whose concern was with objective measures of growth above all else.

At the end of the book, Alan Jacobs praises the writers for the richness of their thought, but concludes that it came too late to make a difference, given that the technocrats had already consolidated their power, and the situation in Australia in 1943 seems to bear that out.

A thought of my own: perhaps the student revolt of the 1960s can be thought of, in part, as a kind of "revolt against the machine" - against the technocratic view of life favoured by the older elite (I'm thinking particularly of the hippy side of it, the drop out/commune with nature/alternative lifestyle side). The student revolt ultimately made things much worse by failing to appreciate and defend the good still existing within society (and there was much still worth defending in the 1960s).

That would be my criticism too of artwork like the following: 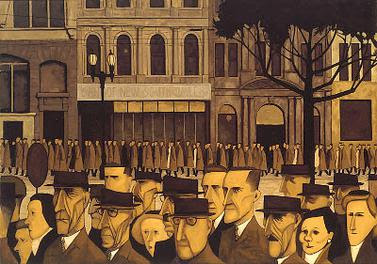 It's a very famous Australian painting titled Collins St., 5pm painted in 1955 by John Brack. It shows the mass of city workers in Melbourne leaving to go home. Brack painted the work after reading The Waste Land by T.S. Eliot.

Again, it makes sense as a protest against the depersonalised, mass, industrial society. But there was much to love and defend in Melbourne in 1955. (I've often wished that much of the city centre of that time had been preserved, like the European "old city" centres.)

I did find the book interesting and thought provoking, but because it provided a snippet of the thought of each writer at a particular time it didn't really provide a depth of argument or insight. I've been left most curious about the essays written by Eliot and Lewis, which I will have to follow up and read when I can.
Posted by Mark Richardson at 11:39 am