Gatekeepers of the failed right pt 2

In my last post I noted that the establishment right likes to call itself conservative but is, in reality, right-liberal (classical liberal/libertarian) and that this explains why there has been no effective opposition to the dominance of liberalism in Western politics.

A reader helpfully pointed me to the following tweet. It is from Jeremy Boreing, who founded The Daily Wire with Ben Shapiro. In the tweet he complains that the younger, independent right-wingers are "retrograde losers" (a slur that sounds similar to "deplorables"):

Think about this. If you are someone who wants to conserve liberalism, then what are you really in your politics? Clearly, you are a liberal. That's your belief system. The "conservatism" doesn't mean anything much in itself, except perhaps that you want to introduce liberal policies a little more cautiously to maintain the stability of the liberal order, or perhaps you prefer the classical liberal focus on the autonomous self-made man in the market rather than the left-liberal focus on state support for the autonomous individual.

This reality of the establishment right being "conservative" only in the sense that they wish to conserve liberalism goes back some way. An Australian PM, Malcolm Fraser, wrote back in 1980 that,


As its name implies, ours is a liberal government holding liberal principles ...


Even former PM Tony Abbott, with a reputation as being one of the most right-wing of the mainstream politicians here in Australia, has followed along with this idea. Not only has he endorsed the comments by Malcolm Fraser, he once defined conservatism as a kind of slow-burning liberalism:


(It's interesting to note that the right wing liberal Abbott defined the animating principle of Australian politics in terms very similar to how the left wing liberal Barack Obama defined the animating principle of American politics. Abbott wrote: "The essential principle animating the Federation Fathers...was citizens’ greater freedom to pursue their individual destinies". For Obama it was "We are the first nation to be founded for the sake of an idea—the idea that each of us deserves the chance to shape our own destiny.")

The idea that a conservative is someone whose love for a liberal take on freedom "grows over time" rather than "at first sight" is lame. If you are going to pursue the liberal concept of freedom, then why would you want to be the one dragging your feet? Why not be part of the pioneering first wave and take the credit?

To finish on a positive note, it's encouraging that some of those reading James Boreing's tweet were less than impressed:

And there was this: 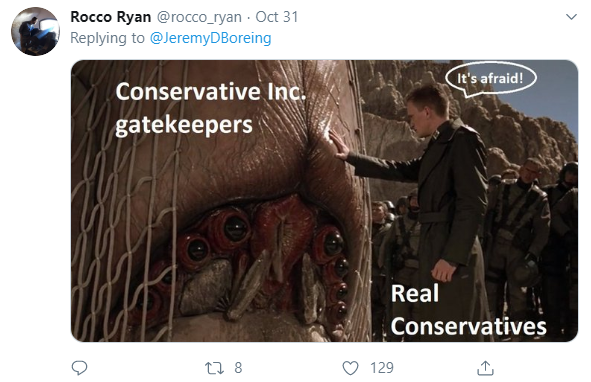 Posted by Mark Richardson at 8:30 pm