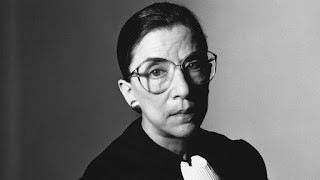 Ruth Bader Ginsburg, a justice of the U.S. Supreme Court, once defined feminism as follows:


"Feminism … I think the simplest explanation, and one that captures the idea, is a song that Marlo Thomas sang, 'Free to be You and Me.' Free to be, if you were a girl—doctor, lawyer, Indian chief. Anything you want to be. And if you’re a boy, and you like teaching, you like nursing, you would like to have a doll, that’s OK too. That notion that we should each be free to develop our own talents, whatever they may be, and not be held back by artificial barriers—manmade barriers, certainly not heaven sent."


This definition conjures up a feeling that feminism is an expansive movement, one that is opening up new vistas of human experience to people, more opportunities, new fields of endeavour.

Maybe this is what some feminists intended or hoped for. I would argue, though, that in practice things have moved the opposite way - that there has been a narrowing of life for most people, a "thinning" of human experience, especially of those aspects of life that once provided a sense of meaning, identity and emotional support to individuals.

Why have things moved the wrong way? It is important to understand that the principle set out by Ruth Bader Ginsburg, as a matter of logic, disallows as much as it permits. And what it disallows is, arguably, much more significant that what it grants.

What Ginsburg is arguing for is the autonomy principle, namely that what matters is a freedom to self-determine. Whatever is a barrier to us self-determining is thought of as a limitation, a cage, from which we have to be liberated.

We do not get to determine our sex. Therefore, according to the autonomy principle our sex should not influence what we might do or be in life. Ginsburg herself wrote:


The gender line helps to keep women not on a pedestal, but in a cage


And the Marlo Thomas song that she believes defines feminism has the stanzas:

... And soon in the park
That was 'Girl Land' before
You'll do as you like
And be who you are.


There is an unfortunate logic at play here in which a girl can only "do as you like / And be who you are" by denying her own girlhood, something that you would think would be at the core of who she is and how she identifies.

It is the same when it comes to family life. To be autonomous means being independent. But a stable, successful marriage requires that men and women cultivate those aspects of their given nature, and those social roles, that make them truly interdependent.

Similarly, successful relationships require that individuals discipline themselves to a higher concept of behaviour, one that promotes high trust and one that places relationships within a larger concept of the good (of service to family, community, nation, God). But autonomy emphasises that we be free to act as we please, to act, as the song puts it, "as you like" without limitations. And so there is a shift to a low trust society with an unstable culture of family life.

There is also an assumption made by those who push autonomy that what matters most as a measure of life is our career. Career success is thought to override other aspects of life that were once thought significant, such as family. We are supposed to live primarily for one thing alone, for our job and for the values associated with it - for work values.

This is more than acceptable to those who have the most power in society. First, because it represents their own value set, but also because it focuses human life on patterns of work and consumption that benefits the plutocracy at the top of society.

If you think back just a few generations, an individual might have felt deeply connected in terms of purpose, social role, belonging, pride, self-worth, commitment, love and identity to the communities they were a part of (town, city, state, nation etc.); to family life and the goods associated with this; to their manhood or womanhood and the identity/values/roles attached to this; to long established ideals of moral behaviour (including to honour); and to the experience of what was "transcendent" in life (not self-determined, but a given part of existence) that connected us to the good, the beautiful and the true (in nature, in art, in religion, in love).

Can we trade all of this for a working life within a corporation or institution and claim that our lives have been expanded? That we have a wider circle of life? Or even that we are freer to be ourselves?

In my own experience, the answer is no. It feels instead as if life is being directed, over time, into a singular and narrower channel. This channel begins with the idea that what matters most is that we are self-determined, moves on to the related idea that our lives are then measured by self-achievement within the market place, which then means that we ideally cultivate "executive focus" skills as a means to this success, which then means that our lives are increasingly regulated by the needs and demands of the corporations or institutions we work for.

I am not entirely against this aspect of life. The pressures of work can help us, for instance, to achieve a higher level of self-governance and therefore build character. My concern is that there is little to delimit it, to provide boundaries to prevent it entirely dominating the culture we inhabit.

Which brings me to a further problem with Ruth Bader Ginsburg's approach to expanding life. According to her, the aim is to remove limits or barriers, as this will then give greater opportunity. But limits or barriers are not always a bad thing. They can protect. They can provide a delineated space within which certain aspects of life can be safely cultivated. They can demarcate, i.e. mark out spaces within which the variety of life can be maintained.

If we really wanted to maximise "self-determination" the smart thing would be to establish, as a community, an understanding of a common good, i.e. of what matters most in our individual lives within a community and then to act to secure this common good. This would give us a much greater control over the course of our lives.

As things stand now, our lives are being radically shaped by forces that we feel are alien to us: by powerful interests in society, by distant government, by a media we have no control over, and by a political philosophy which promises freedom from limitation, but which fails to delimit or protect or uphold, and which therefore places no barriers to the ever expanding dominance of work and consumption as the major source of values in modern life.

A note to Melbourne readers. If you are sympathetic to the ideas of this website, please visit the site of the Melbourne Traditionalists. It's important that traditionalists don't remain isolated from each other; our group provides a great opportunity for traditionalists to meet up and connect. Details at the website.
Posted by Mark Richardson at 9:16 pm