Do women love the same way?

This is a tweet from a young woman hoping to guide other women toward more successful relationships: 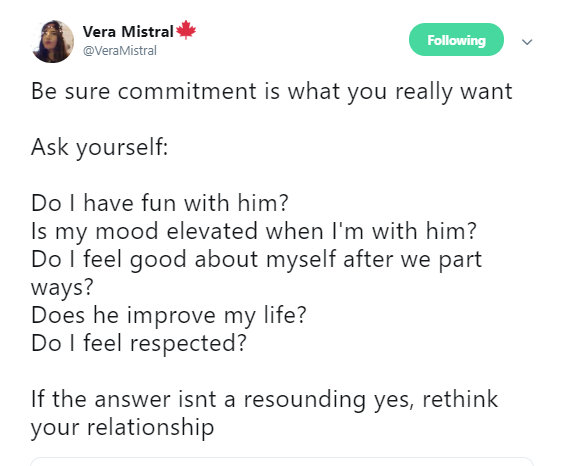 The criteria she is suggesting for selecting a man to commit to is based on how he makes her feel. It is not based on a love for something intrinsic to him as a man.

Men don't approach relationships the same way. A man needs to think that there is something good or beautiful in the woman he loves. He might even have the sense that he is able to perceive in her feminine beauty or goodness something transcendent and meaningful that inspires love.

This is a powerfully masculine response to women that has inspired a great deal of art over the centuries. And it leads men to have a sense that their love for women is a finer quality in themselves. Little wonder then that a man will often focus on the better qualities of the woman he is with, suppressing and forgetting her flaws or the injuries he has received from her. In other words, men will often err toward idealising women in general and their wives in particular.

And so men experience love as being coloured with loyalty, particularly as it often triggers the masculine instinct to provide for and to protect a woman.

Men have a hope, or an assumption, that women experience love in the same way. That she will find something in him, and in his masculine virtues, that will inspire a stable love that mirrors his own. And so the more romantic minded men might well assume that liberating love as a force in life  - the "big love" - is likely to increase the good in life.

But, as the tweet above suggests, women process love and relationships differently. A woman's love is not grounded in the man himself, but in how the relationship makes her feel. And her thoughts and assessments are likely to follow on after her feelings, rather than guiding them.

As an example, when a woman is in the early infatuated stage of a relationship it is often the case that the man can do no wrong. Her feelings about being in the relationship are so positive that even if a man behaves very poorly she will find some mental excuse for it. But the opposite is true as well. If she is not feeling good in the relationship, then her mind will set her husband at fault, even for acts of God.

And the way a woman feels about the same kind of man can change at various stages of her life. At 20, she might ignore the family type man because of the way the "hot" boys make her feel. At 28, when she reaches her epiphany phase and her feelings change toward wanting marriage, children and home, the family man will be told that "he is not like all those other men" and that "all I ever wanted was to get married". At 40, when the alpha reinvestment phase hits, she will feel that the marriage, and her husband, are holding her back from pursuing someone hot, and the thoughts will change to "we were never happy together" and whatever loving bonds might once have existed quickly fall away.

The point of writing all this is to try to explain to men that whereas the "great love" might push us to hold steadily onto our love for a woman, because it holds us to a better part of ourselves, and because it focuses us on the feminine goodness and beauty to be found in women, the same does not hold true in the way that women love men.

What does this mean for relationships? It means that for men to have a stable loving relationship with a woman over the course of a lifetime, it makes sense to dial things down from a vision of a great romantic love. Men are more likely to experience this good of a lifelong relationship in a culture which does not encourage women to let loose with their emotions or their sexuality. The men who encouraged sexual liberation were not really doing themselves, or their sons, any favours. Traditional societies held up modesty as a prime virtue for women for a reason, as it was a self-constraint (a self-regulation of emotion and feeling) that made possible more stable relationships between men and women. Similarly, in more traditional cultures there was value placed on a "quiet, gentle" spirit in women, which may strike modern minds as overly subdued, but which ought to be seen as women ordering their own personalities toward the good.

It means too that the principle of stability cannot be found in the nature of a woman's love, but has to come from elsewhere. One possible source is a genuine and sincere religious outlook, in which a woman acts for the benefit of her family, in obedience to, and out of love for, God. If this reaches the point that feeling is not thought to be sanctified by God, but instead is disciplined toward a principle of love and service to others, then it might help to form a culture of marriage.

There do exist some statistics on the relationship between religious belief and marital stability. The statistics show that nominal membership of a church does not help marital stability much at all. However, active membership, whilst not preventing divorce, does significantly reduce its prevalence (by about 30%). One study found that active Catholics were 31% less likely to divorce than the non-religious and active conservative Protestants were 35% less likely to divorce (nominal Protestants were actually 20% more likely to divorce).

Women can be helped, too, by the culture they inhabit to think prudently about their actions. Our culture has spectacularly failed to help women do this. A generation of women grew up thinking they could defer marriage and family until the last dying gasps of their fertility; the same generation grew up thinking that they could divorce their husbands in their 40s as mothers of quite young children and still expect to find another man equally committed to her and equally willing to be her companion in older age.

Men have to lead in the sense of upholding a vision of the good that provides a stable framework of life for both men and women. Men need to clearly understand that a "liberated" female nature (i.e. one that recognises no good higher than itself and which therefore acts without restraint) is incompatible with a stable culture of family life. The female "mode of being" that is compatible with lifelong marriage will not be based on grand romantic feelings, as much as men might wish it to be so, because this is not how a woman comes to commit in a stable way to the good of her family.
Posted by Mark Richardson at 11:19 pm