Not a true outsider?

If you want the West to continue into the future in any recognisable form, then you have to be a political outsider - at least for the time being.

That's because the political establishment is committed to a liberalism that is dissolving of traditional society.

In the past, the establishment got away with things by giving people the option of a liberal left or a liberal right. You could have passionate disagreement within the sphere of this choice. And it worked - hardly anyone ever left the inside of liberal politics.

But with liberal dominance came ever more radical consequences. Over the past few years an outside finally started to emerge.

This has been wonderful to observe. But for some time I have expressed the concern that the outside was made up of two parts. There is a rank and file that genuinely wants to break from the liberal establishment. But there are also leading figures who are still right liberal by conviction and who only came to the outside because the very dominance of liberalism has made it intolerant and has increasingly placed limits on speech. These free speech right liberals want academic freedom, wish to take on the campus left, don't want to be bound by political correctness, and take individual responsibility seriously.

But they are still liberals. And the danger is that they will seem like courageous outsiders, which then gives them the opportunity to corral those who are drifting outside, to keep them within a liberal politics. You then end up with a controlled opposition.

To make my point clear, look at the following Tweet from Jordan Peterson: 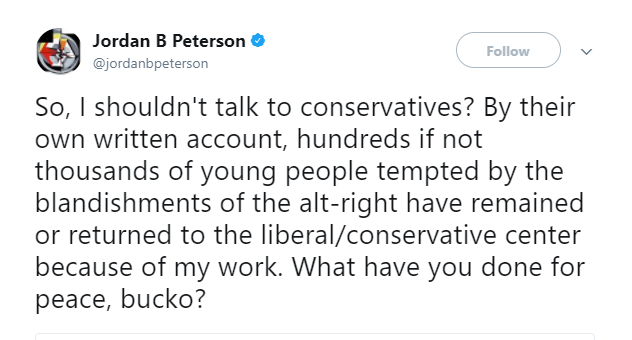 Jordan Peterson is an intelligent man with a commanding manner. His presentations are interesting and often insightful. He has taken on the campus left, who in turn have strenuously attacked him.

So he seems like an outsider. But as he admits his real role is to corral those drifting outside, to bring them back to the centre - to the inside. In doing so, he is helping the West to stay on its current course - which means that the breakdown will only get worse.

The political outside (the "dissident right") will take a step forward when the prominent leaders are those who understand the need to reject liberalism itself in a principled way. I am optimistic that this will happen, but in the meantime we have to take care to distinguish the faux outside from the real thing.
Posted by Mark Richardson at 9:34 am