Libertarianism is not traditionalism 2

I published a post a few days ago on the Cato Institute, a leading libertarian organisation. I was therefore interested to find this in my Twitter feed: 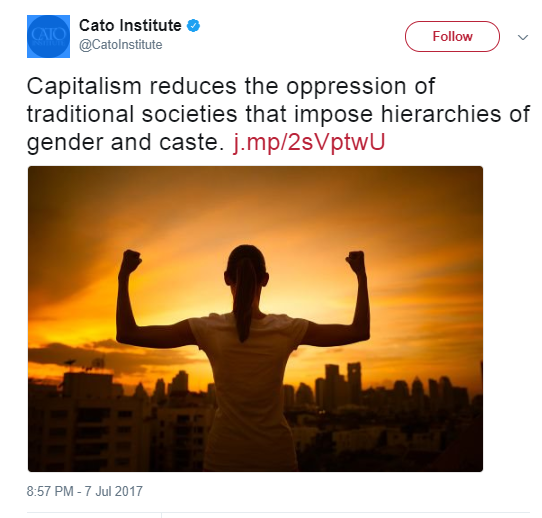 Libertarians, like other right-liberals, look to the free market to regulate society. They believe that this is the engine of human progress. Hence the following quote:


"Capitalism reduces the oppression of traditional societies that impose hierarchies of gender and caste,” writes Cudd, because embedded within market exchange itself is the idea that each individual should be free to pursue her self-interest.


So there you go. The Cato Institute approves a model of society in which there are simply individuals in pursuit of their own self-interest (in particular their economic self-interest).

To a traditionalist this is a model of society that is not only ultimately unworkable, but that also has too limited a view of individual life. Are we really just atomised individuals in pursuit of our own individual profit? Is that what defines us as humans? Are men and women simply interchangeable units within a system of production and consumption?

Capitalism, as an economic system, should not define what humans are. Nor should it define our concept of society. Nor our understanding of the roles of men and women in society.

Does anyone really believe that if we tell young men and women that the highest good is to pursue their own individual self-interest that we will arrive at successful relationships between men and women? Stable families? High levels of trust between the sexes? A commitment to raise children successfully?

Capitalism alone cannot create a good society. It's necessary to keep to those traditional values and institutions that cohere or successfully order a society and which express deeper truths about man, community, belonging and identity.

The one good thing to draw from the Cato tweet is that it reminds us of what to look out for. Perhaps it is, in fact, true that a market system encourages the idea "that each individual should be free to pursue his or her self-interest." This idea goes back a long way in Western political theory - it brings to mind the view of man and society of John Locke in the late 1600s. It is likely that men made wealthy in the market will be attracted to the idea and give patronage to those holding it. But wherever and whenever it arises it needs to be vigorously opposed.
Posted by Mark Richardson at 12:05 am