The birth rate in Italy is abysmal (1.4 children per woman). The Italian Government has opted to encourage Italians to have children and has even declared a national Fertility Day. That's a healthy sign that the Italian Government wishes to see the Italian people continue into the future. But the campaign has hit a hurdle: Italian feminists and leftists are in shock and outrage at the campaign and they seem to have succeeded in derailing it.

I'll use Giulia Blasi, a radio host and writer, as an example. She complains that:


Beatrice Lorenzin, Italy’s Minister of Health, has approved and promoted a campaign that treats all women as little more than walking incubators, people who should hurry up and have children for the sake of the country.

...The initiative, slated for September 22nd, was promoted through a series of “postcards” that are among the most offensive things I’ve ever seen.


So what is so offensive to her? It's this: 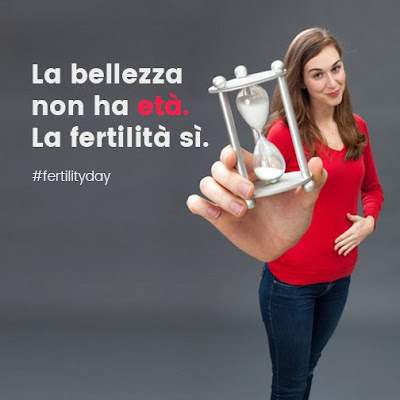 The poster reads "Beauty has no age. Fertility does." Clearly, Giulia Blasi has been raised to view motherhood as something of an existential threat if she finds this one of the most offensive things she has ever seen.

Giulia also finds the following defence of motherhood from the Italian Government so bad that there is "no comment needed":


Motherhood, on the other hand, helps develop creative intelligence and is an extraordinary opportunity for growth. The ingenious organization necessary to make a mum’s day work, the flexibility required by unexpected events, the responsibility and choices involved in childcare, the energy employed daily by a mother are skills and potential yet to be explored in order to facilitate their use upon returning to work.


It's a pity that motherhood has to be defended in terms of developing work skills, rather than as a fulfilment of a woman's feminine nature, but at least the Government is recognising the value of motherhood.

1. Make abortion easier. She is concerned that a woman has to wait seven days for an abortion and that doctors are allowed to be conscientious objectors and not perform abortion procedures.

3. Support women in jobs, for example, by providing cheaper childcare (which really sends the message to women that what has value are careers, with children being a potential hindrance to the "true aim" of a woman's life).

4. Give easier access to Italian citizenship for immigrant families.

Is it not revealing that what first occurs to her, in considering the issue of babies, is to make abortion even easier than it already is in Italy? She has a visceral reaction against fertility, babies and motherhood - her main concern is how to stop these things. She has joined the great liberal death wish.

I do congratulate the Italian Government for its fertility campaign, and it's likely that it will have a positive effect - if it can overcome the leftist/feminist hurdle. But there are some big picture concerns for any government tackling this issue:

1. In a liberal society what matters is the freedom to be an autonomous individual. This is not a good foundation for encouraging a commitment to parenthood. I don't think anyone who wants to maximise their individual autonomy would logically choose to be a parent. We become parents to fulfil our masculine and feminine natures to be fathers and mothers; to create a loving family circle, a home; and to perpetuate our personal, familial and national lineage (i.e. to reproduce). We don't have children in order to be autonomous.

2. Young people are more likely to marry and be in a position to have children when men have access to work; when there is a moral culture that limits casual relationships; when the divorce rate is low; and when trust and goodwill between the sexes is high. In feminist/liberal societies, these supports for fertility are not always present.

3. The arrangement by which both men and women are expected to work full-time, with both then sharing the domestic work in the evenings and on weekends, is more onerous than family life needs to be. It is one factor encouraging people to either limit the number of children they have, or to avoid having children altogether. It's easier in some ways for people on welfare to have children, as they have more time to give to children.

Governments really do need to change course in a significant way if the fertility issue is to be overcome.
Posted by Mark Richardson at 9:55 pm