Australia must be one of the few nations to have a public holiday for a horse race, the Melbourne Cup. It has been called the race that stops the nation which is why one left-wing Anglican minister put up this sign: 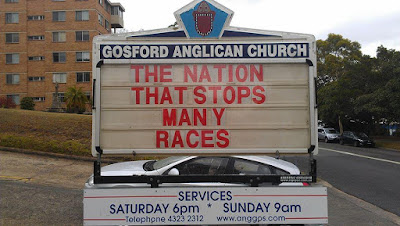 It's a criticism of the Australian Government's policy of stopping the boats carrying illegal immigrants before they reach Australia.

I was curious to learn more about the Gosford Anglicans and their minister, Father Rod Bower. The first thing I found out is that there are many more such signs: 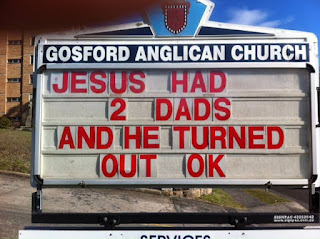 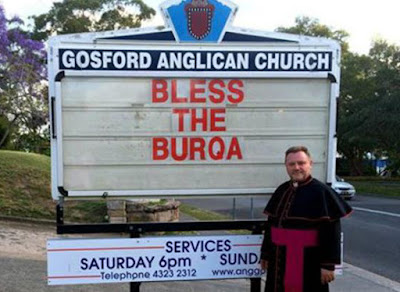 You might think that a flamboyant Christian minister might be a little more cautious in supporting the Islamification of Australia. After all, recent event in the Middle East include the wiping out of ancient Christian communities that once numbered millions and the formation of a caliphate which has imposed brutal executions for homosexuals.

Father Bower has considered this issue, at least briefly. It seems that the flooding of hundreds of thousands of immigrants into Europe this year has given him pause for thought. He does not believe, though, that extremism will ever happen in Australia for two reasons.


We live in a world of extremes. We must not, however, fall into he trap of believing that all these extremes are easily transportable to Australia. We do not have the porous borders of Europe and no matter what the scaremongers say it not possible for people to enter without notice or permission.

Australia is in the unique position of being able to intentionally and systematically receive refugees and to enable them to contribute their own unique gifts to our ever-evolving culture.


This argument seems contradictory. We are reassured by Father Bower that we have nothing to fear because Australia does not have porous borders and can "systematically receive refugees"; at the same time, though, he believes fiercely that Australia should make its borders more porous and our immigration policy less systematic by allowing people to be smuggled into the country.

Here's another contradiction. Father Bower was very critical of Tony Abbot's speech in England, in which Abbott urged Europe to adopt the Australian system of detaining illegal arrivals. But if, as Father Bower states, Europe is in danger of extremism because of its porous borders, then surely the Europeans ought to follow Abbott's advice, or something like it.

This aside, Father Bower might like to consider that it has often been the children of the first arrivals who have committed acts of terrorism, so even screening on arrival does not rule out future problems.

Father Bower also believes that we are in no danger from Islamification because:


We are a rational people who reject extremism of all types whether it is religious or political. As Archbishop William Temple said “we are not moderately passionate, we are passionately moderate." In this exceptional land we have a unique opportunity to build a harmonious, diverse and life-giving society.


Interesting how this is massaged a certain way. Father Bower's liberal moderns do not just reject religious extremism, they mostly reject religion as a whole. In Gosford, Anglicans are outnumbered by atheists by 25% to 18%. Father Bower, as a minister of the cloth, might perhaps think twice before identifying too closely with a mainstream liberal culture.

I note too that Archbishop William Temple himself may not have been as keen on Islamifying Australia as Father Bower is. He wrote in his work Church and Nation (preface xi):


We all know about Turkey; it is the essentially Mohammedan power and Mohammedanism is the religion of oppression; it believes in imposing its faith by means of the sword.


Also, it is not so much a question of whether "we" are a rational and moderate people, but whether the future waves will be equally so.

And, finally, it's difficult to see recent social developments as being "passionately moderate". Is it "passionately moderate" to use migration to dissolve the distinct Western peoples? Or to reimagine nations as being something like large-scale business ventures? Or to dissolve the culture and the social supports that once supported a stable family life?
Posted by Mark Richardson at 11:12 pm