Overseas readers might be particularly interested to learn about events yesterday in Bendigo, a regional city here in Victoria with about 100,000 residents.

One of the unusual things about Bendigo is that despite being largely Anglo-Celtic in demographics, it is being fought over by the world's religions. It has a magnificent Catholic Cathedral; a great Buddhist Stupa is being built there; and the council recently approved a proposal to build a mega mosque. Why Bendigo? It's difficult to fathom, given the small number of Buddhists and Muslims in the area (there are supposed to be about 35 Muslims in Bendigo). Presumably both groups envision that they will one day expand in a major way into the area.

The local residents did not object to the Great Stupa but there has been a campaign to stop the mega mosque. Yesterday a protest rally of about 1000 faced off against a counter-protest of about 500, with almost 500 police separating the two groups: 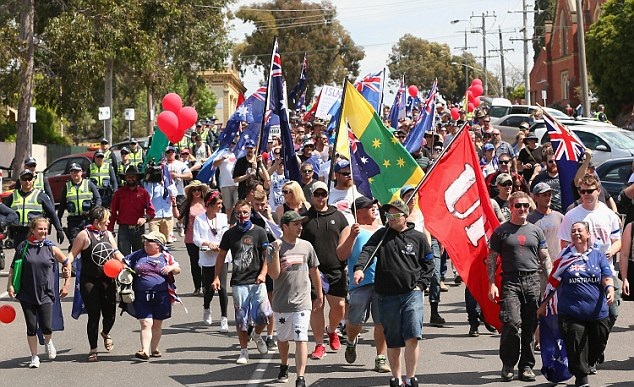 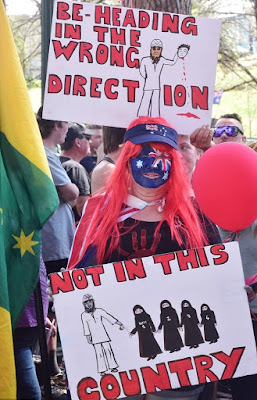 Here is a picture of some of the pro-mosque supporters: 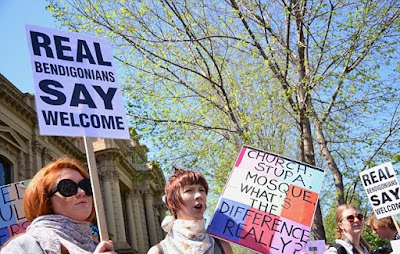 You can see that there is something of a class divide here. The three women above look like well-heeled, middle-class types. I don't think, though, that they are deep thinkers. The woman in the middle is holding a placard saying "Church, Stupa, Mosque - What's the difference really?" which is an extraordinarily blase approach to a serious issue.

After all, there are two possible outcomes. One is that the Muslims who come to the mosque will gradually be influenced by liberalism and adopt liberal values. The other is that they won't and that middle-class Australian liberals will find themselves submitting to Islam instead. I'm guessing that the three women have never really considered the second option.
Posted by Mark Richardson at 11:03 am