The French state is attacking the traditional family, but there is a continuing resistance from thousands of ordinary Frenchmen and women.

The attack is not exactly a subtle one. I reported a debate in the French Senate in which the Minister for the Family admitted that he was attempting to bring about "a silent revolution." One senator then stated that the aim was "to lead the family out of the fantasy of one mother, one father and one child" and to tackle the problem of the "idealized hetero-patriarchal-white family." Another senator then chimed in with this:


The child needs a father and a mother? Pure ideology, just like the concept of a traditional family, the pattern of "daddy-mommy-child" is a broken model


Well, look at the photo below. It was taken at a demonstration against the French Government's family policy that took place in Paris on Sunday. Organisers estimate the crowed at 500,000, police gave a lower but still substantial figure of 80,000. 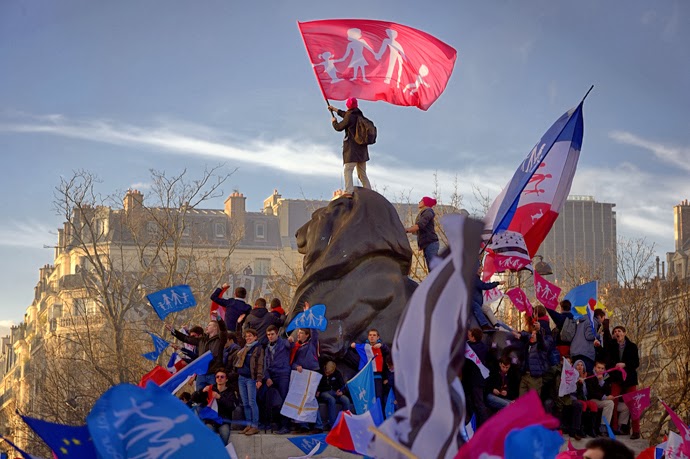 That's a great, iconic photo. The flag of the traditional family is being raised aloft, alongside the colours of France. It represents a determination to uphold a culture of family life, in which the roles of both father and mother are considered vital, rather than dispensable.

The demonstration was also against the imposition of gender theory in French schools. The banner below simply reads "No to gender theory". 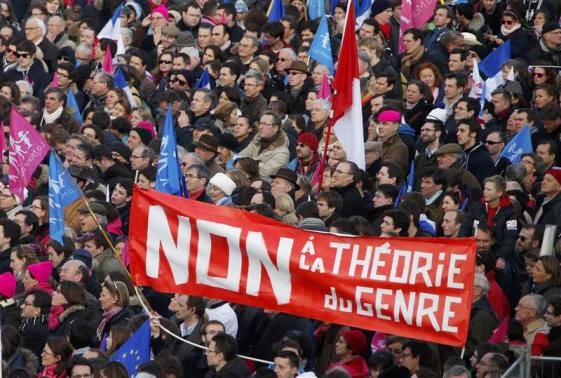 What is gender theory? Marguerite Peeters explains it well:


According to the social engineers who have been fabricating the gender theory since the 1950s, the feminine and masculine identity, the ontological structure of the woman as spouse, mother and educator, the anthropological complementarity of man and woman, fatherhood, heterosexuality (“heteronormativity”, dominant in all cultures), marriage and the traditional family would not exist per se, would not be good in themselves, but would be social constructs: sociological phenomena, social functions constructed over time, stereotypes to deconstruct by way of education and culture as they are deemed discriminatory and contrary to equality.


The French Government has begun to implement a policy (The ABCD of Equality) to push along the process of deconstructing gender. This has led to an effective protest in which parents have withdrawn their children from schools for one day a month. At some schools, about one third of students have been withdrawn.


Thousands of French parents kept their children at home on Monday following warnings that schools were introducing "gender theory" classes that would teach pupils they could choose their own sexual identity.

The government was forced to deny what it called "totally false" rumours that children would be told sexuality was a mere "social construct", after a nationwide boycott of classes.


Well, it's difficult to accept that the claims are totally false when the ABCD of Equality is explained this way:


The program provides detailed advice online for teachers about how they can challenge young children's views about what is typically seen as "girlish" or "boyish." In acting out fairy tales, for instance, boys should be encouraged to play the part of Little Red Riding Hood, and girls the part of the wolf.

The program also urges teachers to encourage reflection on gender issues in other areas such as physical education, art, and history. They might examine the Renoir painting Madame Charpentier et ses enfants, the government suggests, and note that poor Mrs. Charpentier is forced by convention to wear a suffocative corset, and that little boys, as well as little girls, used to wear dresses.

In history lessons, the ABCD of Equality suggests teachers point out that Louis XIV wore high heels and ribbons.


There was anger last June when a primary school-teachers' union suggested pupils should be read a book called Daddy wears a dress about a boxer who becomes a ballet dancer.


And a report by the IGAS (General Inspectorate of Social Affairs) recommends:


"replacing the terms 'boys' and 'girls' by the neutral terms 'friends' or 'children', telling stories in which the children have two dads or mums, etc." According to the report, the aim is to "prevent sexual differentiation and the interiorisation by the children of their sexual identity"


It is an agenda that ought to be resisted and that is what thousands of French people are now doing.
Posted by Mark Richardson at 10:16 pm