Have the Olympics become toxic?

I really tried hard to enjoy the 2012 Olympics, but I have to admit defeat.

Things began badly with a highly politicised opening ceremony. Then the media here in Australia began to push the "female athlete as warrior" idea in the promotional videos. The swimming and running was tolerable, but even so it was difficult not to notice the mannish physiques of the female competitors - for the swimmers wide shoulders, flat breasts and narrow hips, for the runners flat breasts and six packs.

And then the notion was pushed that we were supposed to celebrate these body types as the new female sexy. The Daily Mail nominated one athlete called Jessica Ennis as a woman who might turn male heads: 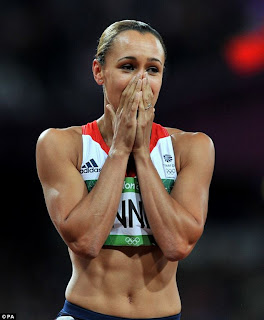 Even so, being a stubborn person I persevered. I told myself that it was only elite athletes who would disfigure their bodies in this way and that most women who took up running and swimming would just add a bit of tone to their physiques.

And then the female boxing started. I just turned off the TV and pretended it didn't exist, but I noticed that a future queen of England had been sent to cheer on the competitors - obviously we are supposed to think the new sport worthy of support.

But last night I switched on and the first thing I saw was two women kicking each other's heads (I think it was Taekwondo).


Enough. If that's the Olympics I don't care for it any longer.

Am I reading too much into what's happening? I don't think so. Consider the thoughts of Sally Jenkins writing for the Washington Post. She sees the same things that I do, but as a feminist is overjoyed by them:


Something remarkable is going on at this Olympics: Adult human males are now waiting in line for tickets to things they used to make fun of. Female athletes such as boxer Claressa Shields and soccer striker Abby Wambach, women with biceps bigger than your brother’s, are being treated as creatures of worth and even beauty. Apparently, strong is the new pretty.

If the trend continues, American women will win twice as many medals as men in London. When you think about their performances here, they are conspicuous not just for how many podiums they are taking, but for how viscerally, hugely, physically powerfully they are doing so before roaring audiences. The London Games are clearly a point of departure...

...One of the most popular and awe-inspiring boxers here is Irishwoman Katie Taylor, the four-time lightweight world champion who was the flag bearer for her country. The only way to stop Taylor, according to one of her defeated opponents, Britishwoman Natasha Jones, is to “maybe drive a bus into her.”

Pound for pound, has there been a stronger performer than all-around gymnastics champion Gabby Douglas? Douglas is 4 feet 11 and weighs about 94 pounds. “All muscle, though,” her mother, Natalie Hawkins, said at a pre-Olympic event in May. When Douglas went to get a pre-event physical, according to her mother, the doctor couldn’t believe her abdominals. The nurse said, “Oh, my God. It’s like steel.” The doctor said, “Never in all my medical career have I seen this much muscle on a tiny person.” “She has muscles in her face,” her mother said.


There is something significant happening here. Let me give another example. One of the few sports that really showcases the feminine nature of women is rhythmic gymnastics. I don't think traditionalists would find it ideal, as the skimpy costumes combined with the body movements aren't exactly modest. But even so there is an athleticism that is combined with beauty and grace of movement in this sport.


Recently I've been trying to get my 7 yr old daughter interested in sports, ever so gently encouraging her to play soccer. Surprisingly, she has shown great interest (if not yet ability) in basketball!

I was very disappointed when I sat down with her just now to watch the Olympics and NBC is broadcasting Rhythmic Gymnastics. That's five beautiful young ladies dressed in skimpy outfits, wearing too much makeup, each prancing around the floor tossing a ball in the air.

I quickly changed the channel. I think SpongeBob would do less damage to her self image.


It's not clear if that's a dad or mum writing about their daughter, but they were horrified by the one remnant of femininity left at the Olympics, fearing that the sight of "five beautiful young ladies" might damage their daughter.

What's going on here? I think Lawrence Auster's explanation is worth considering. The sight of five beautiful young ladies is a reminder that there is an ideal of beauty and grace that is something we might be measured by - which then is perceived by moderns as a "threat" to self.

Here is how Lawrence Auster puts it:


...the cult of self-esteem and self-worship, and the cult of messiness and ugliness that we see glorified at the Olympics, go together. How can this be? If liberal humanity worships and glorifies itself, as I’ve pointed out, how can that go together with the other aspect of liberalism that I’ve also discussed, the liberal attraction to ugliness, unpleasantness, disharmony, meaninglessness, and despair? If liberals worship themselves, wouldn’t they want to be beautiful, not ugly?

Here is the answer. Liberals believe that there is no value, no truth, which is external to or higher than the self, because if there were a truth higher than the self, the self would not be free. Also, if there were a truth higher than the self, then some selves would be closer to that truth and other selves farther, which would mean that all selves were not equal.  What this ultimately means is that any standard of beauty or good behavior, any ideal of harmony, must be rejected and overthrown, since any such standard or ideal would limit the freedom of the self. The very idea of the good must be overthrown, since it limits the freedom of the self. Which means that a world of ugliness, disharmony, and bad behavior, a world of jangling, unpleasant impressions (as in the dress and demeanor of the Olympics athletes, as in our nihilist popular movies such as The Dark Knight series), a world of despair, becomes the ideal, because such things express the freedom of the self from any notion of the good.  Thus the liberal cult of self-glorification, and the liberal cult of ugliness and despair, do not contradict each other, but are part of the same liberal rebellion against truth.


I wonder too if we can say this: that a self-worship (making our self the ultimate end) leads to a lack of humility which then makes a standard of goodness external to ourselves intolerable.
Posted by Mark Richardson at 8:28 am