A car sticker for jaded women?

I was in the parking lot of my local shopping centre and I noticed the following sticker on the back window of one of the cars: 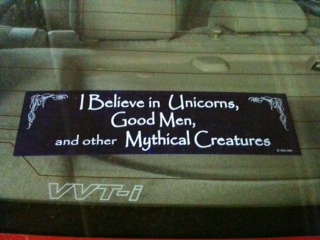 In case it's not clearly visible, the sticker reads: "I believe in unicorns, good men and other mythical creatures".

It's meant to be humorous, but even so if I were a woman I wouldn't put one on my car. People are likely to assume that you've had unhappy experiences with men and have become a bit cynical. It's not exactly good self-advertising.

And, fairly or not, it might even be thought that you're the kind of woman who is drawn to the wrong kind of men like a moth to the flame, who gets burnt each time, but who isn't self-reflective enough to figure out what's going wrong.
Posted by Mark Richardson at 1:24 pm