Canadian baby must choose its own sex

Why would parents not want to tell the world if their baby is a boy or a girl? Regular readers of this site won't be surprised by the parents' answer:

When Storm was born, the couple sent an email to friends and family: “We've decided not to share Storm's sex for now — a tribute to freedom and choice in place of limitation, a stand up to what the world could become in Storm's lifetime (a more progressive place? ...).”

Witterick and Stocker believe they are giving their children the freedom to choose who they want to be, unconstrained by social norms about males and females.

“In fact, in not telling the gender of my precious baby, I am saying to the world, ‘Please can you just let Storm discover for him/herself what s(he) wants to be?!.” Witterick writes in an email.

“Everyone keeps asking us, ‘When will this end?’” says Witterick. “And we always turn the question back. Yeah, when will this end? When will we live in a world where people can make choices to be whoever they are?”

Storm's parents use just the terminology you would expect from liberals: they describe sex as a limitation and a constraint and they believe that by making it not matter there will be an increase in freedom with individuals being able to determine their own self, to "choose who they want to be".

This is how the parents' background is described:

Both come from liberal families. Stocker grew up listening to Free to Be ... You and Me, a 1972 record with a central message of gender neutrality.

The message of Free to Be ... You and Me has been described by Judith Stadtman Tucker as follows:

its principal strategy is portraying traditional gender roles as limiting, hurtful and old-fashioned...

the creators of F2BY&M seem intent on discouraging the formation of romantic illusions in little girls and imparting the value of female autonomy.

As an example of the lyrics of the songs on the record, here are the words to "Girl Land":

... And soon in the park
That was 'Girl Land' before
You'll do as you like
And be who you are.

The parents of Storm have two older children, both boys. They are being raised with the belief that boys should be more like girls and vice versa. The older boy, 5-year-old Jazz, is described as grabbing:

a handmade portfolio filled with his drawings and poems. In its pages is a booklet written under his pseudonym, the “Gender Explorer.” In purple and pink lettering, adorned with butterflies, it reads: “Help girls do boy things. Help boys do girl things. Let your kid be whoever they are!”

And the boys have taken the message to heart, choosing to act in an effeminate way and being commonly mistaken for girls:

On a recent trip to High Park, Jazz, wearing pink shorts, patterned pink socks and brightly coloured elastics on his braids, runs and skips across the street.

“That’s a princess!” says a smiling crossing guard, ushering the little boy along. “And that’s a princess, too,” she says again, pointing at Kio with her big red sign.

Jazz doesn’t mind. One of his favourite books is 10,000 Dresses, the story of a boy who loves to dress up. But he doesn’t like being called a girl. Recently, he asked his mom to write a note on his application to the High Park Nature Centre because he likes the group leaders and wants them to know he’s a boy.

Jazz was old enough for school last September, but chose to stay home. “When we would go and visit programs, people — children and adults — would immediately react with Jazz over his gender,” says Witterick, adding the conversation would gravitate to his choice of pink or his hairstyle.

That’s mostly why he doesn’t want to go to school. When asked if it upsets him, he nods, but doesn’t say more.

The parents haven't done such a gender reversal themselves (apart from Mum's punky hair style). Dad works as a teacher, mum is a housewife. Both are recognisably male and female. You have to wonder how things would work out for them if either decided to drop their own orthodox sex identity. Would mum like it if dad was so effeminate that he was commonly mistaken for a woman? And would dad enjoy the relationship if mum were mistaken for a man? How well would a heterosexual marriage go in such a circumstance?

Here's dad playing with son no.2: 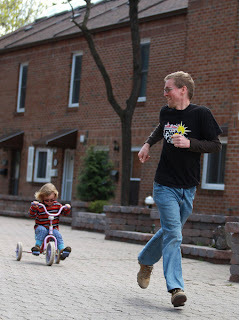 And here's mum with her punky hair but otherwise feminine outfit: 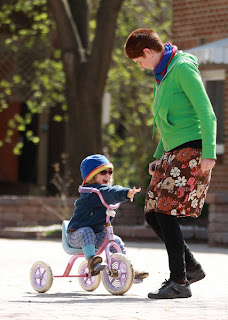 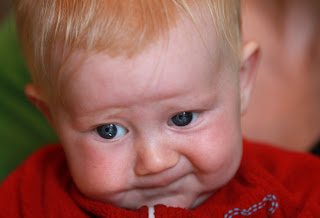 Posted by Mark Richardson at 8:20 pm