Was the worst liberal ever Chinese? 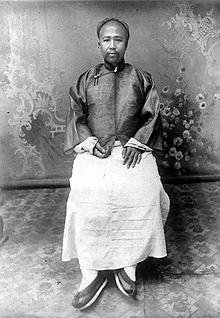 In the late 1800s China was faced with the problem of modernisation. One of the "reforming" Chinese intellectuals was a man named Kang Youwei.
Unfortunately, he caught the Western liberal bug very badly. He combined two of the worst aspects of the Western intellectual tradition, namely a liberal emphasis on "equal autonomy" as well as a scientistic effort to find principles of society as clear and distinct as mathematical or geometric formulas.
From one source we learn that:

Kang sought to delineate absolute moral truths based on a scientific or mathematical approach that supported his universalism ... Using the Confucian value of benevolence, he proclaimed the equality of humanity as well as a notion of individual autonomy. [1]

And where did this lead him? If we continue on with the same source, we begin to get some idea of where this approach was to take him:

He was perhaps the most influential politico-philosophical writer of the 1890s in China ... Although Kang had not yet formulated the principles of his utopian vision by the 1880s, many of his radical notions were already developed.

Marriages should be freely contracted and subject to change; children should be raised in public nurseries with no filial obligations (nor would parents have obligations toward their children); and sages and teachers would have no special authority.

Kang's vision of the king was that of a mediator, chosen by the people for their own protection as two individuals choose a mediator in a dispute. [2]

You can see where this is heading. Kang was enough of an intellectual to take the principle of individual autonomy seriously. He believed that we would be more autonomous if the state raised our children for us and if we had no obligations to our children as parents.

Another source on Kang's ideas tells us that:

In form and organization, as Zhu Weizheng points out, Kang's short and early utopian work ... was "in complete imitation of Euclid's Elements of Geometry,"...

Indeed, Kang Youwei appealed to the authority of science to lend legitimacy and persuasion to his social and political theory, and he claimed, for example, that basic principles such as "human beings have the right of autonomy' and that all societies should be organized on the basis of "human equality" were all "geometric axioms". [3]

This second source draws out further the political programme Kang derived from his scientistic liberalism:

he argued for the eventual abolition of state boundaries and the unification of all nations on earth...racial differences would gradually disappear when "all races will merge into one, and there will be no distinction of the intelligent and the ignorant"...the abolition of families to cultivate world citizenship, the elimination of private ownership...

he would have marriage abolished and replaced with an agreement or contract...sex, he argued "will be a matter of each individual's gratification of desires, with no formal denomination or capacity, no limits or boundaries"...

As you would expect of a liberal, Kang wanted to make sex distinctions not matter. In his own words,

The gist of Kangism? People have to be made the same so that everyone has the same measure of individual autonomy. Distinctions of nationality, of race, of sex, of sexuality, of wealth and of intelligence all have to be collapsed. A global state is to replace the family as a better, more uniform mechanism of regulating equal individual wills.

This is what is then sold to us as a vision of independence, freedom, equality and unity, all "scientifically" based.

It is a radical vision as it is liberalism given to us all at once.

In the West we have taken it more slowly. But a hundred years after such a vision of freedom and equality was penned, we have already been "half-kanged". We are at least half way to the dystopia envisaged for the world by a Chinese liberal of the 1890s.

The problem is that our political class has still not let go of the principles borrowed by Kang over a hundred years ago. And there's little use complaining about the outcomes we are being herded towards, if we aren't willing to challenge these principles.