If we do well it's discrimination. But if we're left out we've been outclassed.

Is the system rigged against Anglo-Australian men? Here's some strong evidence that it is.

Back in February it was announced that there were too many Anglo-Australian firemen here in Melbourne. This was declared to be an offence against multiculturalism and unrepresentative of the community. So the fire brigade launched an affirmative action campaign which aimed to recruit fewer Anglo men and more women and non-Anglos:


Fireys need a new look
FIREFIGHTING - one of the last bastions of white Anglo-Saxon males - is the target of a new diversity push.

The Metropolitan Fire Brigade is determined to change the "Anglo male" dominance of its ranks with a recruiting drive to encourage more women and people of varying ethnic backgrounds to join.

"We are part of a vibrant multicultural community and I think it's important that organisations such as the MFB, which are established for, and paid for by the community, are more reflective of the community we serve," MFB CEO Ken Latta said.

The MFB has applied for exemption from the Equal Opportunity Act to give preference to Aborigines and ethnic minorities for a new 14- week pre-employment training course to boost their chances of selection as a firefighter.

Next month the MFB will launch a campaign to attract more women.

Note how the Herald Sun has reported this news. When it's a case of Anglo-Australian men having the numbers, it's assumed that there's something wrong and that the situation has to be changed: hence the headline "Fireys need a new look".

It's true that there aren't many female firefighters, just 3% of the total force. But, as Andrew Bolt pointed out, there are reasons for the discrepancy:

The MFB was now raving that only 56 of its more than 1700 firefighters were women - a figure that a healthy person would probably find unremarkable, since firefighting can be a very physical game, involving the kind of derring-do that tends to appeal more to the testosteroned.

Nonetheless the chief of the fire brigade has set a target of 50% women and has appointed a "diversity development officer" to achieve this aim.

As for the idea that the fire brigade has to be representative of the community, Bolt writes,

God, I hope not. I don't look forward to the day when the firefighters sent to my burning home reflect a community in which half of us are fat and 10 per cent at least 70.

Nor were the existing female firefighters overjoyed by the affirmative action proposal. Not only did they feel it would stigmatise their own positions, to their credit they also expressed solidarity with their menfolk. One female firefighter wrote:

I take great offence to the fact that the MFB are requesting an exemption from VCAT to be able to discriminate against white Anglo-Saxon males who happen to be a large majority of my work colleagues who have led, supported, cared, included and helped teach me to be the professional firefighter that I am ...

The diversity development manager complained that the women's response was "quite nasty" and that the fire brigade was "entitled to put in place policies as it sees fit."

Which brings me to Case B. A new selective state school has been established in the south of Melbourne. Entry to the school is highly sought after, as it is free and will inevitably have very high academic standards. The students from this new school, Nossal High, will go on to university educations and the higher professions.

So who gets to go to this school? It has been announced that less than 20% of the student population are Anglo children. In other words, Anglo children will be vastly underrepresented at this important new school, one of only three selective state schools in Melbourne.

How did the Herald Sun report this issue? Did it produce a headline along the lines of "Wanted: more Anglos. School needs a new look." If you've guessed the answer is no, you'd be right. Here's the report:

STUDENTS from non-Anglo Saxon backgrounds have snapped up most places at Melbourne's newest public selective school - and aspiration is the key.

Children from Indian, Sri Lankan and Chinese families dominate classes at Nossal High in Berwick, which has just opened with 200 year 9 students.

Principal Roger Page said more than 80 per cent of the students were from non-Anglo Saxon backgrounds.

"And that's because of the level of aspiration," he told the Herald Sun.

"Some of the Sri Lankan, the Indian, the Asian communities are highly aspirational."

So where's the insistence now that state funded institutions have to be representative of the populations they serve? Where are the "diversity development managers" rushing in to overcome the lack of equal representation at Nossal High?

Instead of a story about overcoming a lack of diversity, we get one celebrating it.

So Anglo males just can't win. If there is some area in life they do well in, they'll be pulled back artificially by affirmative action schemes. But if there's an area they are worse off in, they'll be left to be "outclassed". That's why I say the system is rigged against them.

How should Anglo men respond? Not by giving up on getting a decent education and decent jobs - that remains important. But we should give up our illusions in the anti-discrimination and diversity agenda. It's an agenda that is rigged against us and that we would be foolish to support. 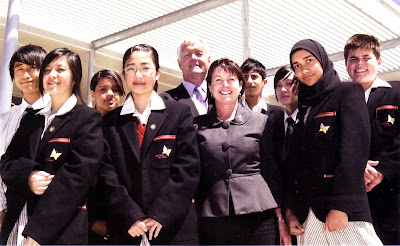 This photo was captioned "Nossal High is nothing if not multicultural". But where are the Anglo students?
Posted by Mark Richardson at 6:27 pm