And this person wants to transform all of you men!

This is a story with an extraordinary ending, so please bear with me and read all the way through.

It begins with a man named Robert Connell. Back in 1995 he wrote a book called Masculinities. There wasn't much that was new in the book. It consists mostly of standard patriarchy theory: the idea that masculinity is a construct and that it provides men with a "patriarchal dividend" at the expense of women. Therefore, social justice requires the deconstruction of masculinity.

But how to do it? Connell argues in Masculinities that there are many masculinities but that one is "hegemonic". This is an idea borrowed from Gramsci. It means that there is one form of masculinity which manages to get itself accepted as authoritative and that through this the existing values of society are upheld.

Therefore, there cannot be transformative change until the hegemonic masculinity is deconstructed. But Connell recognises that a sense of masculinity is embedded in the male personality and that it is formed in part through bodily practices (such as sport).

So what's required is not just a change in patriarchal institutions. What is needed is a change in the male personality and bodily practices. Men need to be degendered in body and in personality.

Connell's book was highly successful. He became the world's leading theorist of masculinity. The charity Oxfam, for instance, believes that its role is to secure gender equity by transforming masculinity throughout the world. The information on its website is clearly drawn from Connell's work:


Throughout the organization, we will base our work on a common understanding that gender equality is key to overcoming poverty and suffering.

[this requires a consideration of] the invisibility of gender issues to most men and the notion of the ‘patriarchal dividend’ (i.e. the privileges that all men draw upon simply by virtue of being male) ... the dominance of specific forms of (‘hegemonic’) masculinity; how masculinities are actively constructed; the costs associated with masculinity for both men and women; and the dynamic nature of masculinities over time.

‘Hegemonic masculinity’ is a concept that draws upon the ideas of Gramsci. It refers to the dynamic cultural process which guarantees (or is taken to guarantee) the dominant position of men and the subordination of women.

Again, just to illustrate how serious Oxfam is about transforming masculinity here are some additional ideas from its website:

Oxfam’s approach to poverty – the importance of gender analysis

… masculinities are actively ‘produced’ by individuals, rather than being programmed by genes … It is sometimes argued … that being ‘natural’ masculinity is impervious to reform. But our research demonstrates the reverse … Clearly there are risks involved in attempts to reshape masculinity …

Again, Connell is the most frequently cited authority in this document written for the United Nations Development Programme (UNDP). The document reminds readers that the UN has called for a "transformative change" to achieve gender equity. Masculinity, it is claimed, stands in the way of "progress" toward a new world order of centralised, global government and increasing ethnic diversity:

In effect, masculinity becomes a rhetorical currency by which opposition to global integration, state centralization and increasing ethnic heterogeneity can be mobilized. (p.4)

It is Connell who is again looked to as the expert authority on the matter:

So Connell managed to become an international authority on masculinity, or at least the deconstruction thereof.

But this is where we get to the dramatic twist in the story. In his book Masculinities Connell anticipated that the aim of degendering men in their bodily practices and in their personalities would arouse opposition.

In particular, it would arouse the fear that a process of degendering men would turn men into women:

If the problem is basically about masculinity, structural change should follow from a remaking of personality. (p.230)

...emotional turmoil and guilt feelings ... are a measure of the resistance even in favourable circumstances. In other circumstances the project will be rejected out of hand as an attempt to turn men into women.

It follows that a degendering strategy, an attempt to dismantle hegemonic masculinity, is unavoidable.

The degendering strategy applies not only at the level of culture and institutions, but also at the level of the body - the ground chosen by defenders of patriarchy, where the fear of men being turned into women is most poignant. (p.232)

What we are moving towards is indeed "something rich & strange"; and therefore, necessarily, a source of fear as well as desire. (p.234)

The reason I highlighted these passages is this: Robert Connell is no longer legally a man. He has, it seems, had sex change surgery, legally changed his identity, and transformed himself into Raewyn Connell. Below is a photo of the radically transformed Robert Connell.

Given that Robert Connell took this drastic step, I think we're entitled to ask some questions. 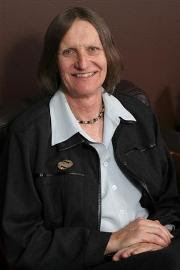 Did Robert Connell always feel conflicted in his own masculinity? Does this help to explain his feeling of estrangement from mainstream masculinity? Or his repeated claims that men needed to change their bodily practices to more feminine ones of nurturing babies?

Or did the theory itself push Connell to view masculinity as so malignant that it had to be physically cut away?

Or did the theory, with its emphasis on the bodily transformation of men, lead Connell to arrive at the radical solution pictured on the left?

At any rate, the idea that the great project of liberation is to degender men's bodies and personalities, is associated in the case of its founder with a result that won't appeal to too many men.