Men's Rights activists should be a little bit pleased. They've been noticed. Enough to merit a vitriolic attack on them in the Melbourne Herald Sun.

hiding in the broom cupboard begging for mercy as the little lady gives them the rounds of the kitchen.


And so he endorses the White Ribbon Day campaign which blames men as a class, male culture and male privilege for domestic violence - with the implication that masculinity itself is anti-social and must be deconstructed.

How can this be? What forms does female domestic violence take? Well, here's a sample from the mainstream media collected over the past few weeks:

Sydney, Australia: Sibling tiff ends in tragic slaying. A young woman has admitted killing her schoolgirl sister after a fight over a hair straightener.

Bairnsdale, Australia: Brutal street slaying. A woman walking her two dogs was stabbed to death in broad daylight ... The woman is believed to have been attacked by a young woman.

Melbourne, Australia: Mother encouraged daughter to attack. Footage of a mother encouraging her daughter and another teenage girl to brutally assault a shy and vulnerable teenager has been played to a Melbourne court.

London, England: A primary school teacher who specialises in helping aggressive children has been sacked for punching a female colleague in the face.

Langley, Canada: Police in Langley are investigating after a woman kicked a man in the groin so hard he lost a testicle - the latest in a series of similar assaults. "I just want to know what her problem is," victim Anthony Clarke, 22, said this week. "People like her shouldn't be on the streets."

Adelaide, Australia: A jealous wife who allegedly set her husband's penis on fire will answer a murder charge in January.

Epping, Sydney: A 26-year-old woman has been remanded in custody after being charged with the murder of an elderly Sydney woman.

DeLand, Florida: Scorned wife hurls soup can at husband's head. The wife whacked him in the head with a can of soup when he got home, leaving a 1-inch cut on his forehead.

Edgewater, Florida: An Edgewater woman faces felony charges after police said she went after her estranged husband and another woman, cutting them with a razor knife.

Brandon Woods, UK: A 98-year-old woman has been charged with the murder of her 100-year-old room mate.

Remember, these are just the cases of female violence I've stumbled across in the press in the last few weeks. I could have added of course one of the most high-profile cases of domestic violence, the alleged attack on Tiger Woods by his wife Elin.

Oh, and here's one with a photo:

Gold Coast, Australia: A fight erupted between female schoolies last night ... About six girls viciously punched each other and scuffled in the sand. 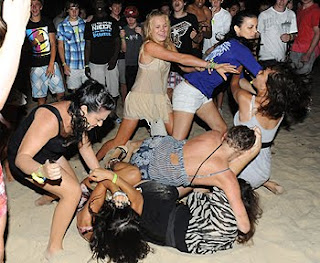 Not all women are genteel. Women can and do perpetrate violence. Any honest campaign against domestic violence ought to recognise this fact.

I'll leave the last word to Sue Price. She is part of an Australian group called the Men's Rights Agency. David Penberthy's attack piece in the Herald Sun was directed mostly at her, for her criticisms of the White Ribbon Day campaign. But I think she got it right:

“By claiming nearly 30% of young women can expect to be assaulted, WR campaigners are creating an unnecessary climate of fear and an expectation that far greater numbers of young men will be violent”, said Sue Price. “To profile our young men and particularly young impressionable schoolboys in Grades 5 – 8 in such a way is to diminish their belief in themselves as young males. Branding them with a wrist band displaying the slogan 'Say no to domestic violence’ and indoctrinating them in believing they should take on the shame and guilt for others' bad behaviour is totally unacceptable and counterproductive.”

Author of Not Guilty: the Case In defence of men (1999) David Thomas applauded teaching boys to be “non confrontational” but warned “educationalists who seek to cut down on sex–attacks and crimes of assault by attempting to undermine the very idea of masculinity or to feminize young boys will find their policies have precisely the opposite effect. Well-balanced men, who are secure and confident in their masculinity are far less likely to harm women than men who are insecure or resentful” (p.217).

Posted by Mark Richardson at 9:36 pm