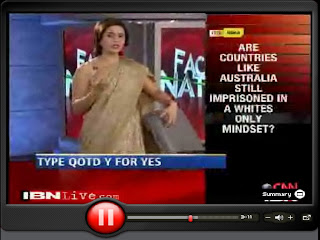 Face the Nation is an Indian current affairs show. It featured recently a discussion about the attacks on Indian students in Melbourne and Sydney.

The program's host blamed the violence on Australians still holding to an illegitimate white and Western identity rather than embracing multiculturalism. She introduced the discussion by asking:

So has Australia actually been able to create multiculturalism within its society? ... we're asking the question: are countries like Australia still imprisoned in a whites only mindset? You're telling us at the start of the show, 71% are saying yes, well that's a very decisive verdict, 71% seem to know that this is in fact the case ...

The panel members ran with similar arguments about the violence:

Srivastava argued that the Australians are confused over their identity as a nation.

“There is resistance in certain sections to a multi-cultural Australia."

What's wrong with framing the issue this way? First, it's presumptuous for Indians to declare the traditional national identity of another country to be illegitimate - as a "prison" to be escaped from. It's not exactly reassuring for white Australians to be told that we are to switch our allegiance from our traditional Western allies to the emerging Asian powers when there are such hostile views towards us within these countries.

Second, the framing of the debate puts things exactly the wrong way round. It is not traditional Australia which is attacking the Indian students but modern multicultural Australia.

Take the most recent attack on an Indian in Melbourne. The attackers were members of a Vietnamese gang who on the same night bashed a Brisbane tourist, Jeff Pooler, putting him in a coma in intensive care.

The police have also revealed that most of those who have committed violent assaults in the city come from the northern suburbs of Melbourne. I'll list the suburbs which produce the most offenders and put in brackets the percentage of households where only English is spoken (2006 census data): Reservoir (49%), St Albans (28%), Craigieburn (70%), Broadmeadows (41%), Hoppers Crossing (72%), Sunshine (37%), Coburg (50%), Glenroy (53%) and Coolaroo (44%). On average 49% of households in these suburbs speak only English at home. So the violence is again associated with multiculturalism - making it seem odd to recommend multiculturalism as a solution to attacks on Indian students.

How is the media explaining the violence? So far Dr Birrell of Monash University is the only one I've seen who has recognised the link to multiculturalism. He was quoted as arguing that,

Indian students had come under attack as enrolments boomed, pushing them into less affluent suburbs of Sydney and Melbourne where they competed for jobs and housing with youth from low-skill migrant backgrounds.

I'm sceptical that competition for jobs and housing has much to do with it, but at least Dr Birrell recognises the demographic reality.

The Lord Mayor of Melbourne, Robert Doyle, has chosen to blame bogans for the attacks. Overseas readers may not be aware of what the term bogan means: it usually refers to culturally unsophisticated, working-class white Australians. Other figures have started to blame poverty and disadvantage. But none of this makes much sense.

After all, back in the early 1980s there were bogans and there was poverty. Even so, you could go pretty much anywhere anytime in Melbourne. I can remember thinking with some pride back then that for such a large city Melbourne was remarkably safe. I don't recall ever meeting hostility or aggression from the working class Australians of that time. I found them easy to get along with.

So what changed? Again, we shouldn't ignore the effects of multiculturalism. Within traditional Australian culture there were certain rules of engagement when it came to violence. It was unusual for weapons to be used in fights. The fights were usually one on one. It was thought cowardly to king hit (sucker punch). It would have been thought vicious to kick an unconscious opponent in the head. Looking at someone the wrong way was not thought to be sufficient provocation for an attack. A drunk person mouthing off was not generally thought to have invited upon himself a bashing.

Clearly for some cultures these rules do not apply. It has now become dangerous to follow the traditional culture, as a man who is worse for wear, alone and expecting a fair fight has become exceptionally vulnerable to attack - particularly if he is not aware that there are some groups who might target him as a rival.

So the Indian media pundits have it wrong. They have blamed a traditional Australian identity for street violence and recommended multiculturalism as a cure. But the violence is more closely associated with the newer, multicultural areas of our cities. As I wrote earlier, the Indian journalists have things exactly the wrong way around.
Posted by Mark Richardson at 9:36 pm