What should Australia's national identity be? Matthew Albert and Samah Hadid believe they have the answer. In a feature article in Melbourne's Age newspaper, they have called for Australia to become a chameleon nation.

Their argument runs briefly as follows. There are now a lot of ethnic minorities in Australia and therefore,

it is perplexing that our projection of Australian identity is built around stories that still have Paul Hogan-like Australians at their centre.

This is a quick and unsympathetic way to dismiss the older Anglo tradition in Australia. Samah Hadid represents a very recent wave of migrants who have really only arrived in numbers over the past decade. And yet she is already expressing impatience that Anglo-Australians aren't getting out of the way fast enough.

What this betrays is how little modernist intellectuals really care for cultural traditions. And if you think I'm wrong in this then read on a little further.

If Hadid and Albert don't appreciate the existing culture and identity and want it immediately replaced, then what do they propose putting in its place? To their credit, they are open and honest about their aims:

Australia needs an identity that the world recognises as being global, and therefore, like the world, multicultural. The new identity will make our diversity a high-profile asset. We need an identity of a chameleon nation ...

Culturally diverse societies are able to adapt more successfully to rapid global changes, including increasing global population mobility. Australia is increasingly becoming part of a global community. In the same way that G20 finance ministers and Central Bank governors committed themselves last Saturday to tackle national financial security by rejecting protectionism, so too should we reject protectionism concerning our national identity "security", which tends now to reflect a cliche.

Australians from culturally diverse backgrounds have contributed to Australia's entrepreneurial skills, bolstering our country's ability to trade and interact with other nations. Migrants have thereby contributed to Australia's economy and significantly broadened business opportunities. The line of business builders from Belarusian-born Sidney Myer to Czech-born Frank Lowy attests to this. This will continue. And, it should be at the centre of our national self-image.

Metaphors of the past will not suffice for a changing future. Australia should move away from aiming to be a melting pot or a mosaic. It should be, what we call, a chameleon nation. A chameleon nation adapts to fit in with its context.

It is a nation that draws on the full spectrum of its diversity to respond holistically and intelligently to global change. The chameleon nation we envision draws on, and builds all the differences it contains to ensure that Australia is a nation of the world and continues to contain the world within our nation. Our chameleon spirit can be manifested in the way we welcome migrants and refugees, and the way we accept changing demographics.

The chameleon spirit could make Australia's community of globally literate people its greatest asset and its multiculturalism a brand to sell on the global market. Our multiculturalism could be our marketing pitch, one to allow Australia to better adapt to emerging situations internally and externally, economically and socially ...

What a national identity! We are to proudly have a "chameleon spirit" which means adapting ourselves utterly to the needs of the global market. What a rank and empty technocratic vision is spelled out above. The real message is: you are not to have a stable identity at all, culture doesn't matter, it is proper to change your identity for the purposes of trade, and you are to be so open that you will come to perfectly represent the global elsewhere rather than something distinct of your own.

Even the Age cartoonist seems to recognise this. The cartoon drawn for the article shows a "Chameleoroo" - an old, jaded, money-grubbing creature - with its young progeny in the pouch hungering eagerly after money. 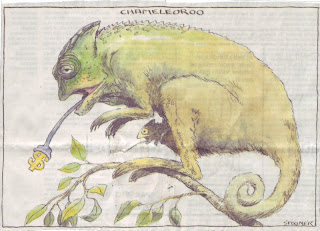 Is the cartoonist disappointed in what things have come to? That a national identity should be thought of in such spiritless, uncultured, technocratic and materialistic terms? Is this what he thought his liberal politics was going to lead to in the end?
Posted by Mark Richardson at 8:16 pm