Forgotten history: the harvest of the steppe

I watched a very interesting documentary the other night. It was about the love affair between Suleiman the Magnificent and Roxelana.

Why so interesting? Because it unavoidably made reference to aspects of history that most Westerners never learn about.

The history Westerners are presented with today always puts us in the position of "powerful oppressors". The assumption is that humans are naturally oriented toward "equal freedom" but that Westerners have perversely denied this good to humanity by asserting their dominance over everyone else through acts of racism, sexism, colonialism etc.

So history becomes a parade of white men oppressing Aborigines or black Americans or some other group and the acts of resistance by these oppressed groups to secure a human future for all.

Whites come to be seen as exceptional in history, a dominant group inventing categories of oppression from which humanity is struggling to be free.

The real problem for Westerners is that our period of ascendancy lasted just long enough for us to be tagged this way by the liberal left. We were still dominant in the mid-twentieth century, so we got to be the ones tagged as uniquely responsible for the absence of a leftist utopia.

So let's go back to Suleiman and Roxelana. What does their love affair teach us about the past? 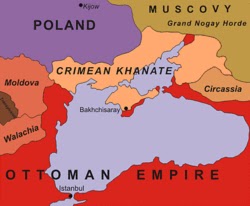 Roxelana was born in the early 1500s in what is now Western Ukraine but was then part of the Polish kingdom. She was captured by the Crimean Tatars in the 1520s, taken to the city of Kaffa, a centre of the slave trade, and then selected to be part of the harem of the ruler of the Ottoman Empire, Suleiman the Magnificent.
﻿﻿﻿﻿﻿﻿

Roxelana was part of what is called the "harvest of the steppe". In the 1500s, there was a struggle on the eastern borders of Europe between the Islamic Tatar warriors of the powerful Crimean Khanate and the Cossacks of the Russian and the Polish-Lithuanian kingdoms. The Tatars launched raids into the European territories, taking slaves back with them to be sold into the Islamic Ottoman Empire. Some historians have estimated that up to 3 million Europeans may have been enslaved.
﻿﻿

The Khanate was under the protection of the Ottoman Empire. The Ottomans were a powerful force for hundreds of years. It was the Ottomans who destroyed the Byzantines and who captured Serbia and Bulgaria. In the 1500s, Suleiman led his armies deeper into Europe, defeating the Hungarians and laying siege to Vienna in 1529.
﻿﻿

Tatar raids continued until Russia gained sufficient military might and forced an end to them by a treaty in 1699. Even so, the enslavement of Europeans by the Ottomans continued, with eighteen hundred Serbian women and children being sold into slavery in a single day in Belgrade in 1813. And the slave trade operating out of the port of Sale in Morocco was only ended in 1816 by the actions of a combined Anglo-Dutch fleet. It has been estimated that up to one million Western Europeans were enslaved over a period of several centuries by Muslim corsairs operating out of Morocco.
﻿﻿

And what of Roxelana? She became the favourite of Suleiman, winning his love and being permitted, against the conventions of the palace, to bear more than one son. One of her sons inherited the throne after Suleiman murdered his own first-born son, Mustafa. The fate of other European slaves was very different: they became domestic servants, concubines, or soldiers for the Muslim population of the empire. The emperor maintained a palace staff consisting of up to 900 white eunuchs.
The enslavement of millions of Europeans by Muslim powers in the Middle-East and North Africa lasted for nearly a thousand years, persisting into the 1800s. And for many hundreds of years, various Muslim powers occupied large areas of southern, south-eastern and eastern Europe.
﻿﻿

If you follow the leftist script, you're unlikely to think in terms of possible dangers to the West. The assumption is that Westerners are the powerful ones preventing the expression of humanity's true free and equal nature. In fact, there is a double distortion in the leftist way of thinking. First, it is assumed that Westerners must be powerful, as it is the power of white males which is thought to be blocking the further progress of humanity. So the focus isn't on possible dangers, but on the need to further cut down the position of Westerners. Second, even if the balance of power were to change, and Westerners were to lose power, the non-Westerners aren't associated with structures of dominance and so aren't held to be a possible threat or risk.
This leftist view is based on a limited reading of history, on a snapshot of history at a particular moment of Western ascendancy, rather than on a longer-term understanding of the rise and fall of empires and civilisations. ﻿﻿﻿
Posted by Mark Richardson at 5:49 pm