What is the purpose of art?

From the Daily Mail:

A Muslim artist has sparked outrage with his depiction of the ripped-apart bus destroyed in the 7/7 terror attacks.

The artwork shows four angels flying above the bombed bus - the same number of Al Qaeda terrorists who took part in the atrocity which left 52 commuters dead and maimed hundreds more on London's transport network.

Also seen are scores of ghostly souls shooting from the number 30 bus, which was travelling through Tavistock Square when it was devastated by suicide bomber Hasib Hussain.

The artist's defence? Less a Muslim and more a modernist one:


I want to shock.

So the idea that art is there to shock is still around. I look forward to the day when this justification for art is thoroughly discredited.

Art has a number of purposes. It can entertain, commemorate or simply decorate. But high art has a high purpose: to capture and communicate the transcendent moment, when we perceive a value that exists in the world independent of our own will. 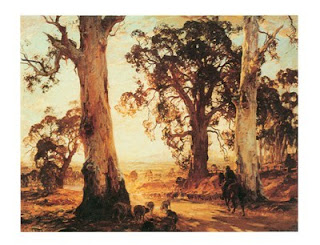 To achieve this requires a sensitive power of apprehension in the artist as well as highly developed artistic skills.

The Australian landscape painting on the right is by Hans Heysen. It is clearly not intended to shock the audience, but to inspire a certain kind of elevated response to nature.

This is a more meaningful basis to art, and one that better dignifies artists and their profession, than the mere attempt to shock.
Posted by Mark Richardson at 10:48 pm