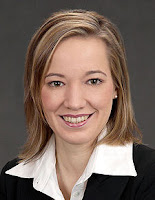 Here's an interesting development that Alte alerted me to. In Germany the Federal Minister of Family Affairs, Senior Citizens, Women and Youth is a 33-year-old woman named Kristina Schröder. She is affiliated with the Christian Democratic Union.

Usually those who head the ministries for women in Western countries are orthodox feminists. But not Kristina Schröder. She has made some criticisms of radical feminism; has argued that women are paid less because of the fields they choose to study; has rejected affirmative action quotas; and wants the advancement of boys to be a focus of her ministry.

The most important of these departures from feminist orthodoxy is her recognition that pay differentials can be explained in part by the different choices that men and women make when it comes to fields of study and work and that it's unreasonable to expect women who study humanities to end up being paid as much as men who take on more economically oriented, technical vocations.

She is not a victim, in other words, of the usual reflex to blame the situation on discrimination or sexism.

Here's a rough translation of the Spiegel article (did a bit of German at uni):

Family Minister Kristina Schröder is sharpening her conservative profile - and is taking down (?) part of the feminist movement. "I believe that at least early feminism overlooked in part that partnership and children bestow happiness," said the CDU politician to the Spiegel.

The youngest minister of the black-yellow federal government doesn't spare from her criticisim the icon of the German women's movement, Alice Schwarzer. Quite a few of her theses are too radical, said Schröder. "For example, that heterosexual intercourse is scarcely possible without oppressing women. To that I can only say: Sorry, that's wrong." She adds, "It is absurd, when something that is basic for humanity and its survival is defined as oppressive. That would mean that society couldn't continue without the oppression of women."

It was a mistake of a radical current of the women's movement to reject relationships between men and women, continued Schröder. "That homosexuality should be the solution to female disadvantage I didn't find really persuasive."

The minister rejects advancing women in careers through coercive state measures such as quotas. A quota would be "a capitulation of politics" (?). At the same time she allocated to women some of the blame for often not earning as much as men. "The truth looks like this: Many women like to study German studies or humanities, men in contrast electrical engineering. - and that has consequences for wages. We can't forbid companies to pay electrical engineers better than German studies graduates.

The Minister for Women announced that a focus of her politics in future will be the advancement of boys, because they had fallen behind the scholastic achievement of girls for some time.

Politics has culpably neglected boys and men's issues. It was not only necessary that more men should work in the future as teachers in primary schools. The educational content also ought to change. "Do we write enough dictation with football stories? Boys are interested in that. Or is it always about butterflies and ponies?"

Posted by Mark Richardson at 10:25 pm