The Swedish theory of love

In 2016 a documentary about life in Sweden was released with the title "The Swedish theory of love". A preview of the documentary summarises it this way:


In February of 1972 a group of Swedish politicians gathered together to define a new idea for the future. Motivated by a strong need to challenge traditional social structures, they outlined a new goal. Their vision was to create "a society of autonomous individuals". A manifesto was written in which it was concluded that no "citizen should be dependent on another." Cut to present day, forty years later. Scandinavia is the loneliest region in the world. Sweden statistically has the highest number of people dying alone and tops the chart for single households with 47% of people living alone.


The 1972 manifesto referred to above was called "The Family of the Future". According to the documentary the manifesto called for a liberation of individuals from the traditional family with its dependent relationships. In the future there would only be "true" relationships, formed by wholly independent, autonomous individuals. As an academic explains in the documentary:


The Swedish theory of love. What does it say? It says that all authentic human relationships have to be based on the fundamental independence between people...The ideal family in Sweden is made up of adult individuals that are fundamentally independent, working for themselves.


But instead of authentic relationships, the plan led to a loss of human relationships, with large numbers of Swedes living a solitary existence. If you look at the following chart you will see that more than 50% of households in Sweden consist of a sole resident, well above most other countries: 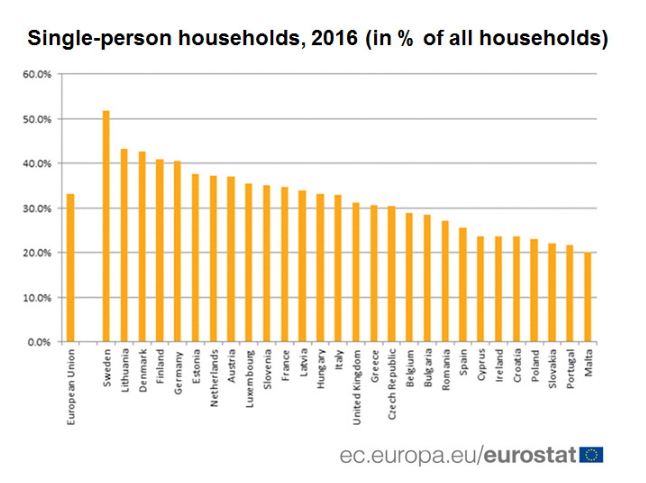 The documentary presents some of the more dystopian aspects of the Swedish emphasis on autonomous relationships. It is now the case, for instance, that more than 50% of the clients of the region's largest sperm donor bank are single women. The manager of this bank has a futuristic vision in which women could have a virtual reality experience of being with a man whilst impregnating themselves without needing to have any physical contact with a man during the process.

And what of life for these single women? Here is one of the women featured in the documentary with her child (on a swing): 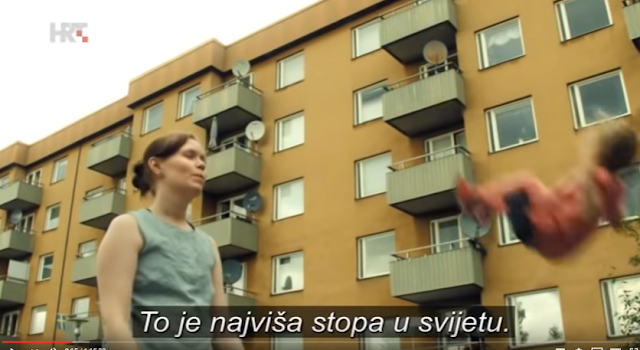 I think in comparison of the beautiful family homes built in Melbourne in the 1800s and early 1900s and cannot see much evidence of progress in the photo above. The Swedish state might provide for these single mothers but it does so along coldly functionalist lines.

It is also the case that 25% of Swedes die alone, having no contact with family members. We are shown in the documentary the work of agents of a specialist Swedish government agency tasked with investigating these deaths. These workers comb through the dead person's apartment, looking for clues for any family relationships. (As a point of comparison, when my first Australian ancestor died in the early 1900s she had over 80 surviving descendants.)

Why does the Swedish theory of love not work? It is true that when people depend on each other in marriage that they might stay from necessity rather than love - and that this is something not to be desired.

This does not mean, though, that if people have no need for each other, that there is a stronger and more pure emotional bond. The psychology of relationships tends not to work this way. Modern women, who have been "liberated" by the state from any need for masculine support, often talk about no longer needing a man. It tends to make such women feel less impelled toward serious relationships; to be less attracted to what ordinary men have to offer; and to feel less of a sense of gratitude toward men (toward individual men and men as a class). Some women end up confused; they have a nagging idea in their mind that they should be in a relationship, but nonetheless don't feel compelled to actually commit to one.

In contrast, when men and women do fulfil distinct roles within the family, and rely on each other for support, there is a more positive expectation of what a relationship might bring to one's own life, leading to a greater desire at an earlier age to make a serious commitment, as well as a stronger sense of gratitude (and the love that flows from this) towards one's spouse.

It's even the case that if the state steps back, so that the family is the key source of support for individuals in a society, that the family then also brings a greater measure of independence for its members. The family might then allow, for instance, a young woman to leave her parents' home to form a family of her own, or it might allow a more stable accumulation of wealth with the financial independence this creates, or it might give to the individual a degree of material and emotional security within which life goals might be more confidently pursued.

The emphasis on autonomy when it comes to relationships has also made it easier for individuals to treat relationships casually. If we don't need family relationships, because the state guarantees our independent existence, then we can more readily play the field.

But the experience of recent decades suggests that this leaves significant numbers of people jaded and more emotionally distant from others, rather than primed for pure and authentic relationships as the theory suggests. People left in this condition are, if anything, even more likely to feel that they are "settling" if and when they do eventually form a more longstanding relationship.

One final point. Sweden is the end point of most Western societies. As the narrator in the documentary puts it,


The idea that we should be able to manage our lives on our own autonomously, that's not a Swedish invention, it's part of a belief in individuality that has been defining life in the whole Western world for some time. But here in Sweden we've been unusually effective at turning words into reality.


I think that we can expect our own societies to develop along lines similar to Sweden - unless there is a change in the political philosophy (i.e. the state ideology) which currently dominates in the West.

Posted by Mark Richardson at 10:18 pm