Why anti-clericalism in a secular age?

The Pope's visit to Britain has unleashed some astonishingly hostile reactions: 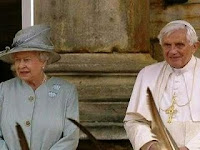 Journalist Claire Rayner:  I have no language with which to adequately describe Joseph Ratzinger, AKA the Pope. In all my years as a campaigner I have never felt such animus against any individual as I do against this creature. His views are so disgusting, so repellent and so hugely damaging to the rest of us, that the only thing to do is to get rid of him.

Scientist Richard Dawkins: the Pope .... A leering old villain in a frock

Philosopher AC Grayling: If the head of a drug cartel was involved in a conspiracy, we would ask some very serious questions once he came to the UK. Why should we treat the Pope any differently?

Author Philip Pullman: In one way, I hope the wretched organisation will vanish entirely.

Peter Tatchell: He has strayed from the moral and ethical values of most Catholics and most of humanity.

This is not just advocacy of secularism or atheism. It is so emotionally charged and hostile to the Church that it better deserves the name of anti-clericalism.

Which raises a question. Anti-clericalism has mostly featured in countries in which the Catholic Church played an influential role in society. There were intellectuals in these countries who, in rebelling against society, sought to attack and undermine the Church through acts of mockery, sacrilege, dispossession or violence.

But modern Britain is run along secular, liberal principles. So why would intellectuals there feel the need to kick so viciously at the Pope?

I'm open to ideas, but I would answer this way. For some decades, a pure form of liberalism has asserted itself. Liberalism no longer accepts values drawn from aristocratic codes of honour, or a family ethos, or identification with a national tradition, or ideals of masculine or feminine behaviour.

So there is no tempering of a liberal world view. Liberalism is going it alone and this is leading to ever more radical forms of liberal concepts of equality and justice.

To put all this another way, if you want your liberalism pure and "uncompromised", then you may not react too favourably to the Pope arguing that Christian institutions should be allowed to be run along Christian, rather than liberal, lines. The Pope's views would have been far less controversial even 30 years ago, but now they conflict with the expectations of a section of the political class - even to the point of rousing powerfully anti-clerical feelings amongst some of those most committed to secularism (and betraying the fact that liberal toleration isn't always so tolerant).
Posted by Mark Richardson at 9:05 pm